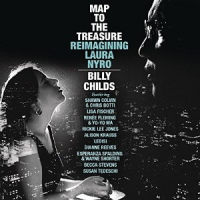 The latter day jazz community, by and large, has embraced songwriting icons from the other side of the fence. Numerous artists associated with jazz have visited in on Bob Dylan's iconic work, explored the dark soul of Tom Waits, reshaped the poetic work(s) of Leonard Cohen, and/or tapped into the Joni Mitchell well. But what of Laura Nyro? The woman behind such under-appreciated classics as "Stoned Soul Picnic," "And When I Die," "Eli's Comin,'" and "Wedding Bell Blues" has largely been ignored in jazz circles, but that all seems to be changing. Vocalist Mark Winkler got the ball rolling by delivering a finely-crafted tribute in the form of The Laura Nyro Project (Cafe Pacific Records, 2013), but that album, sadly, seemed to fly under the radar. Now, pianist/composer/arranger Billy Childs weighs in, tipping his hat to Nyro with Map To The Treasure: Reimagining Laura Nyro. It's a project that, with strong label support, brilliant arrangements, and an endless parade of stars from every stylistic constellation, can't be ignored or overlooked.

Childs and producer Larry Klein put together an album that captures the zeitgeist of Laura Nyro, focusing in on beauty, fragility, spirit, love, and tenderness. And while Child risks being overshadowed by high profile guests—vocalists Shawn Colvin, Dianne Reeves, Renee Fleming, Rickie Lee Jones, and others, plus instrumental giants like Wayne Shorter and Yo-Yo Ma—it never happens. His arrangements, alternately built with Vince Mendoza-esque subtly, chamber-ish sophistication, and grandiose gestures, help to focus the album, keeping it from turning into a de facto compilation of Nyro numbers; and his piano, serving as a guide through the music, is gently impactful, adding support and color when the instrumental seas part.

On paper, some of these artist-song combinations may seem odd, but most everything works. Even songs that seem suspect at the start—most notably, Jones' flirtation with "Been On A Train"—manage to inspire, aspiring to great heights with soft and hard touches at play. Other performances, like Ledisi's grooving and relatively straightforward stroll through "Stoned Soul Picnic," hit the expected marks. And while the guest vocalists all take turns shining, one of the most beautiful aspects of this recording centers on the way that Childs goes beyond pairing singer to song, adding another layer by pairing instrumentalist to singer in some scenarios. The meeting between Fleming and Yo-Yo Ma is beautiful but not surprising, and Esperanza Spalding is right at home with Wayne Shorter's musing soprano saxophone, but who could've predicted that Jones and saxophonist Chris Potter would share space? And who could've guessed that saxophonist Steve Wilson and blues rock vocalist Susan Tedeschi would sound so good at the height of the "Gibsom Street" storm? Childs is full of surprises, as is the music of Laura Nyro. This one has Grammy written all over it.

New York Tendaberry; The Confession; Map To The Treasure; Upstair By A Chinese Lamp; Been On A Train; Stoned Soul Picnic; Gibsom Street; Save The Country; To A Child; And When I Die.