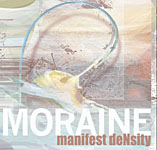 The place where chamber music meets the intensity and attitude of rock music has been explored, in recent years, by groups including Canada's Bell Orchestre and US-based Clogs. Add to that list Moraine, a Seattle-based quintet that, with its unorthodox line-up of violin, cello, electric guitar, bass, and drums, has plenty of attitude—and energy. This ain't your father's Ekseption, turning classical repertoire into high octane, progressive rock; this is original music touching on wealth of markers including, with guitarist Dennis Rea's clean/slap-echoed guitar, hints of surf rock. It's also, with cellist Ruth Davidson and violinist Alicia Allen, progressive contrapuntal music that, with its repetitive patterns, references minimalist composers Philip Glass and Steve Reich, but from a greater distance. But that's only two aspects of the rich and surprisingly varied Manifest DeNsity.

Less doom-and-gloom than symphonic downers Anekdoten, Moraine still occupies some of the same turf on the grungy, crunching "Kuru," with Rea's jaggedly distorted guitar and drummer Jay Jaskit's thundering drums. Without the mellotron that so defines the Swedish goth-prog band's sound, Manifest DeNsity's overall texture is, well, less dense, but the interlocking parts that periodically coalesce into a brief, head-banging theme lend a deeper complexity, making this set of 11 originals curiously compelling. There's some soloing, too, making Moraine an improvising band of no small worth, though spotlights are always brief, and tightly integrated within the group's highly structured arrangements.

Davidson's "Revenge Grandmother" begins in introspective fugue territory with its violin/cello duet, but morphs into a darker groove, where Jaskit's mallet-driven drums act as a primal, tribal force. Still, the rapidly shifting, episodic nature of the tune—a defining characteristic of the entire album, where only one song approaches the seven-minute mark and most are under five—makes it a journey that feels much longer than it is. Hints of early Henry Cow RIO cohabitate with Red-era King Crimson but, despite a predilection for the raucous, there's a quirky, idiosyncratic quality that, especially on Rea's knotty "Staggerin,'" references fellow Pacific Northwester, guitarist Bill Frisell's more oblique 1990s work with Kermit Driscoll and Joey Baron. The track even swings a little, with bassist Kevin Millard layering a walking bass line underneath Davidson's surprisingly oblique solo, and Rea's close, sophisticated voicings.

It's not the only hint of jazz to imbue Manifest DeNsity, with Rea's "Nacho Sunset" containing more than a touch of 1970s-era Jean-Luc Ponty; still, it's the guitarist's boxy, overdriven sound that largely dominates that track, as he demonstrates an ability to navigate the changes that's mirrored by Allen, whose inventive solo combines lithe linear phrases with unanticipated harmonies.

As artists lean increasingly towards eclecticism and stylistic cross-pollination, it's becoming more and more difficult to define the space a group occupies. But with its combination of rock energy, chamber classicism, and sophisticated jazz harmonies, Manifest DeNsity is simply good music—at times, great music—played by an unusually configured collective. Like a square peg and a round hole, Moraine defies reductionist categorization, other than pinpointing its general position along the broader musical continuum.