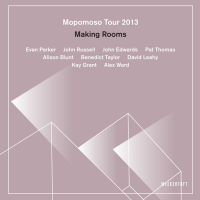 Originated by guitarist John Russell and pianist/trumpeter Chris Burn, Mopomoso is an improvised-music organisation that has run a series of monthly concerts in London ever since 1991, making it the longest-running such series in the UK. Between April 23rd and 30th 2013, Mopomoso embarked on a tour of England which visited seven cities outside London. At each stop, local improvising musicians supported the core group of musicians—Russell, saxophonist Evan Parker, bassists John Edwards and David Leahy, pianist Pat Thomas, violinist Alison Blunt, violist Benedict Taylor, vocalist Kay Grant and clarinetist Alex Ward. Making Rooms is a four-CD set that was recorded on that tour. The discs are distinct, each one by a subset of the core group—the trio of Parker, Russell & Edwards (also known as House Full of Floors after their 2009 Tzadik album), Thomas solo, the all-string trio of Blunt, Taylor & Leahy, and the Grant-Ward duo.

The most obvious feature of those groupings is that the players know each other well and have experience playing together. While that makes for first-rate music, it rather goes against the Mopomoso ethos which often combines players with little or no prior knowledge of one another, leading to some surprising and unforeseen successes. Another comment (not a grumble) is that Mopomoso is renowned for regularly inviting overseas players to play with UK-based musicians but, for funding reasons, the core group on the tour were all English. Doubtless, the next Mopomoso tour, will take note of such considerations...

Meanwhile, the music here makes an excellent advertisement for freely improvised music in general and for Mopomoso in particular, the four contrasting discs showcasing the range and variety of the music, its energy and its beauty. House Full of Floors opens proceedings with three extended pieces, totalling some seventy minutes. Parker humorously described this trio as being "like three people on a tight rope each holding a safety net for the others." At one level that is an excellent analogy, as each of the three plays a similar role in ensuring the other two are supported and integrated into the totality of the group's music. That requires sympathetic listening from each of them, allied to the ability to react swiftly and appropriately. All three make those skills seem like second nature, so their music is never remotely as precarious or wobbly as Parker's analogy might suggest; on the contrary, it is tight, focused and flows easily.

Disc two features Pat Thomas alone at the piano, on nine tracks, ranging in length from two-and-a-half to over thirteen minutes, nearly an hour altogether. As he has demonstrated on albums from Nur (Emanem, 2001) through to Al-Khwarizmi Variations (Fataka, 2013) Thomas is in his element when playing solo piano. Here, he employs the instrument's full dynamic range from lightly sounded single notes to tumultuous pounded chords in order to conjure up as broad a range of emotions. Although his music is improvised, Thomas does not shy from the piano's history; an occasional phrase or inflection reveals his love of Monk, and some of his rhythms are reminiscent of stride. The disc ends to the sound of a well-deserved ovation from the audience.

The string trio of Blunt-Thomas-Leahy presents another contrasting facet of improvised music, one that continues to gain in popularity thanks to this trio and other all-strings groupings such as Barrel (of which Blunt is a member) and Stellari String Quartet (of which Edwards is a member.) In common with those ensembles, the trio here deftly avoids anything remotely reminiscent of chamber music and produces music that is recognizably freely improvised. They display characteristics similar to House Full of Floors—empathy, interaction, co-operation—producing music that is just as compelling. (Interestingly, this trio's members have all been London Improvisers Orchestra regulars, as have Parker, Edwards and Ward.)

The Grant-Ward duo rounds off the album very nicely, with seven tracks, one from each of the cities the tour visited. As on their duo album Fast Talk (Emanem, 2011) voice and clarinet follow each other very closely, remaining distinguishable but otherwise becoming woven together as each follows the other. Listened to as a whole, it is impressive how consistent and coherent their interactions were across the seven gigs in seven cities—was the psi factor at work?

The discs of this set are individually titled and sleeved, all four being housed together in the pictured box, alongside an attractive 20-page booklet documenting the tour. Altogether, it is hard to find fault with any aspect of this release. The YouTube footage below, of an ensemble performance by the core group, indicates that this box set has not exhausted the fine music from this tour. May we hope that more albums will be released from it? On this evidence, Making Rooms already seems certain to feature prominently in many an end-of-year list of best releases. Yes, a future classic.