By KARL ACKERMANN
September 12, 2016
Sign in to view read count 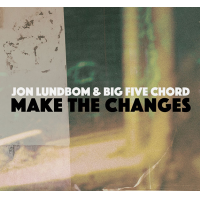 Earlier in the year, guitarist Jon Lundbom, and his Big Five Chord quintet, began the unusual business approach of releasing a stratified set of four EPs, eventually culminating in a complete box set on Hot Cup Records. The approximately one half-hour of content on each disc was a lavish proposal from the start, giving each EP a solid stand-alone value. The idea, in and of itself, has been an appealing one, and like serialized books, each of the previous three volumes served up their share of musical cliffhangers, building anticipation for the next. Make the Changes, the final entry in the series, is being released concurrently with the complete box set.

The rest of Big Five Chord group remains the same with Mostly Other People Do the Killing's Jon Irabagon on alto saxophone and bassist—and Hot Cup founder—Moppa Elliott, joined by Bryan Murray (aka Balto Exclamationpoint) on a variety of saxophones, and drummer Dan Monaghan. Like each of the three previous EPs, Make the Magic Happen, Bring Their 'A' Game and Play All the Notes, this final disc contains original pieces and closes with an Ornette Coleman composition.

ADVERTISEMENT
The opening saxophones and guitar quickly drop off on "MacGuffin," giving way to a rare Elliott solo, later joined with Lundbom who takes his own. It's a crafty, up-tempo piece that changes personality again as Irabagon brings it to loosely swinging conclusion. "Ghost Tattoo" is, for much its duration, a spare piece with Exclamationpoint on tenor saxophone. Some late complexity is layered in as Irabagon, Elliott and Monaghan add their voices. More boisterous and rocky is "Utile" where Exclamationpoint picks up his namesake hybrid sax, breathing fire, and eventually, burning the place down. Coleman's "Enfant"—from Ornette on Tenor (Atlantic, 1962)—closes the set and takes the piece further out than Coleman's creation. It's a case of more-is-better as the quintet share time up-front and in group improvisations, extrapolating something innovative when compared to the original composition.

Lundbom, and his Big Five Chord stand ideas on their head and break them down, reformulating the basic elements like a chemical reaction. Nothing is wasted or diluted on Make the Changes. Edgy and stimulating, the music often plays on thin ice, doubling down and managing not to fall through. Perhaps the best thing that this group, and their EP collection (2016: EPs), shares with its kindred label mates MOPDtK, is the ability to have enormous amounts of fun with liberating free playing while observing to just enough sanity to be accessible.