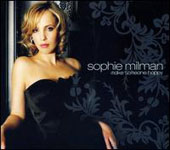 Not that it ever totally went away, but the torch singer is making something of a comeback after years of neglect. Call it the Norah Jones Effect, but for some reason people are once embracing vocalists who can actually sing a song instead of emote and hit notes that make dogs start howling.

Sophie Milman's too cool to hit glass-breaking notes. She's more of a whisperer than a screamer which works just fine when she's crooning seductively ("Something In the Air Between Us"), in a cool groove ("So Long, You Fool") or just paying homage to the greats ("Fever").

Born in Russia, raised in Israel, or attending college in Canada, Milman is perfectly comfortable embracing American jazz. Not a surprising choice because her voice seems most natural and comfortable with jazzy standards instead of a slice of pure pop such as Stevie Wonder's "Rocket Love" where she demonstrates that blue-eyed soul singing may be a knack beyond her.

Want a sign that Milman is an up-and-comer? She doesn't think twice about asking former Guess Who and Bachman-Turner Overdrive hitmaker (and fellow Canadian) Randy Bachman to add guitar to "Undun" where the flute of the multi-talented Cameron Walls captures the slight bossa nova flavor of the song. Still, when compared to her interpretation of Peggy Lee's smoky "Fever," a Top 40 refugee like "Undun" makes for Milman engaging in some elegant slumming. Nobody could sing a goofy tune like, "(It's Not Easy) Bein' Green" without an element of "Oh, are you kidding?" to it, but she plays it perfectly straight, never letting the song get away from her and always in control of her musical choices.

Milman is accompanied throughout with a group of supporting musicians that while not flashy, compliment her well, allowing her space to be the star of the show.

If anything, that is the only real drawback to Make Someone Happy; it's too darn safe. There is a small amount of "formula" involved that puts Milman into Las Vegas lounge singing instead of jazz vocalist. Maybe it's the glamour shot photos of her blond good looks that makes it appear that a sexy image is selling the music instead of her vocal acumen.

As sophomore efforts go, Milman is well positioned to break out big. She has the looks, smart production, impressive musical taste and a mighty fine singing voice. All she needs now is some exposure and the right song to take it to the next level of success. Whether or not a song from Make Someone Happy provides that push remains to be seen. As it stands, it's a strong sign of her growth and increasing confidence as an artist.

People Will Say We're In Love; Something In the Air Between Us; Rocket Love; So Long, You Fool; Matchmaker, Matchmaker; Like Someone In Love; Make Someone Happy; (It's Not Easy) Bein' Green; Reste (Stay); Fever; Undun; It Might As Well Be Spring; Eli, Eli (A Walk to Caesarea).