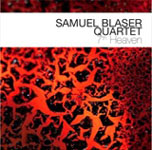 New York-based, Swiss-born trombonist Samuel Blaser has appeared on over 30 recordings as a sideman and former member of numerous European big bands (including the Vienna Art Orchestra). 7th Heaven is his impressive debut as a leader. Accompanied by sympathetic peers, his quartet interprets these elaborate, lyrical compositions with knowing restraint and simmering volatility.

Drawing on his classical education, Blaser blurs the line between the written and improvised with an intricate, multi-layered aesthetic that is as melodically engaging as it is exploratory. Employing ample space and open tonalities, Blaser's angular tunes are ethereal even at their most tumultuous. Dominated by the three-part "Metamorphose Suite," the album unfolds with an atmospheric, neo-classical attention to detail.

A commanding soloist with a harmonious approach to abstraction, Blaser enriches his mellifluous, buttery timbre with multiphonics, smears and myriad extended techniques to paint swirls of expressive chiaroscuro. Together with nimble guitarist Scott DuBois, they craft a rich sonic palette. A rising presence in the Downtown scene, DuBois has a distinct, effusive style that avoids routine conventions. Eschewing electronic EFX, he favors an unaffected, traditional guitar tone to fuel his blistering intervallic runs and percolating salvos.