Maximize your visibility at All About Jazz by upgrading your musician page from standard to premium. With it, you'll receive All About Jazz home page exposure, a highly stylized / ad-free musician page with bonus features and benefits, an ad, plus you control where you sell your music and so much more.
Learn More
152 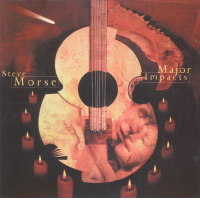 On “Major Impacts” Dixie Dregs leader Steve Morse pays all due respect to the guitar giants who inspired him to perfect his craft and eventually join their pantheon. Morse, Dregs bassist Dave LaRue and drummer Van Romaine construct walls of sound higher, wider and stronger than most power trios since the heyday of Cream. Speaking of which, the opening tune is dedicated to Clapton and company, and it sets the crunching pace for the whole album. LaRue’s muscular bass is here, as in the Dregs, an ideal complement to Morse’s fluid genius.

Morse is, of course, no bar-band hacker. He infuses much of his personal style into these original tunes while tipping his hat recognizably to each idol. He slathers the Hendrix homage (track #2) with temperate doses of crunch, prettiness, buzzing string bends and backwards pyrotechnics. #4 updates Byrds leader Roger McGuinn’s 12-string sound and lyrical songsmanship. #6 was inspired by John McLaughlin, one of Morse’s most consistently obvious influences, but the supportive piano and LaRue’s rich, buttery fretless give an unacknowledged wink and nod to the Pat Metheny Group as well. My personal favorites are his tributes to Keith Richards and Mountain fretman Leslie West, one of the most intense dudes to ever place pick to axe. Bravo to Steve Morse for tastefully, originally wearing his heart on his sleeve for one of his most entertaining releases to date.

Tracks – Derailleur Gears; Well, I Have; TruthOla; Migration; Led On; The White Light; How Does It Feel?; Bring It To Me; Something Gently Weeps; Free In The Park; Prognosis.