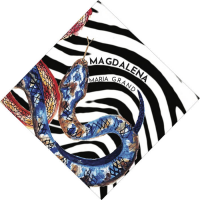 The intimate and personal Magdalena is tenor saxophonist Maria Grand's second release as a leader. On it she fleshes out the ideas explored on her dynamic debut EP, Tetrawind (Biophilia, 2017). Sandwiched between two spoken-word tracks, the recording showcases Grand's skills as a vocalist, instrumentalist and composer.

Rapper Amani Fela articulates another one of Grand's poems, "Ejes y deseos," with suave elegance and poignant emotion. Grand leads the quartet, comprised of Dutton, bassist Rashaan Carter and pianist David Bryant in a simmering and angular performance. The overlapping music and narration create a provocative and moving conclusion to the superb album.

Grand opens "TII: Maria" with a forlorn, unaccompanied solo. Her musings become denser and solidify around her sidemen's spontaneous and dissonant rhythmic refrains. The group's sound becomes fiery and the interplay among the musicians ardent without losing its cerebral edge. Mystical and undulating "TIII: Magdalena" is a sad and pensive melody that Carter's lyrical and graceful extemporization bisects. Dutton's cymbal splashes and Grand's long and wistful lilt add a layer of intrigue to the piece.

Bryant joins the trio for the cinematic "Where is E" dedicated to Grand's estranged sister. His virtuoso crystalline phrases have bluesy hints that Grand echoes in her reserved wails. Their duet is filled with sublime melancholy.

Grand joins another pianist, Fabian Almazan, for a vibrant song "Imani/Walk By." Her expressive voice and Almazan's expansive lines create an impressionistic and romantic atmosphere.

Grand also sings two short, yet haunting, tunes, accompanied by guitarist Mary Halvorson. Both "Last Year" and "Sing Unborn" have an ethereal feel and a serene passion thanks to Halvorson's unique style and Grand's tender and stirring vocals.

Magdalena is a captivating and memorable record. It is an auspicious early success in Grand's already brilliant career and, hopefully, a portent of greater artistic accomplishments in the future.