Eliane Elias: Made In Brazil 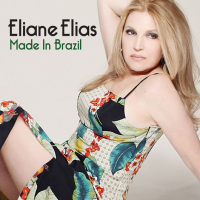 If you've never been to Brazil, consider Eliane Elias as a goodwill ambassador with Made In Brazil. It is a triumphant return for the pianist/vocalist to her native land to record her first album there since relocating to the United States in 1981.

There is a delicacy to how Elias chooses and approaches the material. There is no genuflecting to pop music as there was on Light My Fire (Concord, 2011). Here Elias is all about adult emotions and days of "wine and roses" gorgeously captured on her original, "Searching." Elias called upon Rob Mathes to handle orchestral arrangements on seven of the 12 tracks which were recorded in London at the legendary Abbey Road Studios. Never overbearing or overblown, Mathes utilizes the strings to enhance the dreamily romantic atmosphere of Made In Brazil.

You might think by now Elias would have covered the Antonio Carlos Jobim classic "Aguas de Marco (Waters of March)." After all she dedicated a tribute to her countryman, Eliane Elias Sings Jobim (Blue Note, 1988), but somehow she bypassed "Waters of March." That oversight is remedied by inviting the vocal group Take 6 to join in with some R&B sweetness as Elias deftly provides a sparkling solo on the Fender Rhodes.

When a musician is wearing as many hats as Elias is here as a producer, composer, lyricist, arranger, musician and vocalist there is an inherent risk of coming up short somewhere, but there are no notable lapses. Whether Elias is dueting with daughter Amanda Brecker on "Some Enchanted Evening" with band mate and husband Marc Johnson on acoustic bass or joined by composer Roberto Menescal who adds his vocals to "Você" and guitar on "Rio," the results are nothing short of blissful perfection.

Switching gracefully between English and Portuguese, Made In Brazil is a sensual, sexy, swaying journey through Elias' native heart. Beyond any doubt it proves you can go home again.

Elias has firmly established herself as an consummate talent whether she is behind the keyboard or in front of the microphone. The artist presented in these twelve tracks is an assured and polished professional who brings a subtle delicacy to this music. Made In Brazil is another glittering gem in Elias' crown as the luminary leader of contemporary bossa nova, samba and Brazilian jazz.