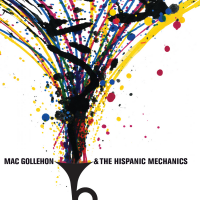 It's not often you hear of Miles Davis complementing trumpet players, but apparently prolific studio player Mac Gollehon was one of the rare exceptions. Nicknamed "chops" by the jazz icon (according to myth anyway), Gollehon has a very impressive resume; arranging and playing lead trumpet on over 500 gold/platinum records, he worked with big names like the late master David Bowie on his legendary "Let's Dance," 80's favorites Duran Duran and the inimitable Rick James to name just a few.

Gollehon's latest offering, a self titled release with his group The Hispanic Mechanics, is a foray into Latin rhythms and sounds blended heavily with electronic dance music (EDM). A far cry from his 2010 release Mac Straight Ahead, this album is not at all a straight ahead jazz record and is far less brass/trumpet centered. Instead, it focuses on the grooves and rhythms that are at the forefront of both Latin musics like salsa and EDM.

Songs like "No More Drama," give a good idea of Gollehon's concept of blending driving latin rhythms with contemporary electronic sounds. It is this unique approach that gives the record its unique experimental yet danceable sound. The healthy dose of R&B/funk influence doesn't hurt either. Likewise,"Dale Jamon," features a heavy layer of electronic sounds juxtaposed with a classic salsa montuno and timbales, creating an entirely unidiomatic yet intriguing new work.

Don't think that the album doesn't feature Gollehon's trumpet playing, though. In addition to his horn arrangements, his formidable high register playing adds excitement to every track it's found on, and his solos, a good example of one being found on "Exito Obscuridad," are always musical and serve the composition beautifully.

Any fan of lead trumpet playing will undoubtedly find Gollehon's playing enjoyable, and for those who like to listen to experimental, latin or electronic music (or the rare fan of all three!), this record will be a real treat.