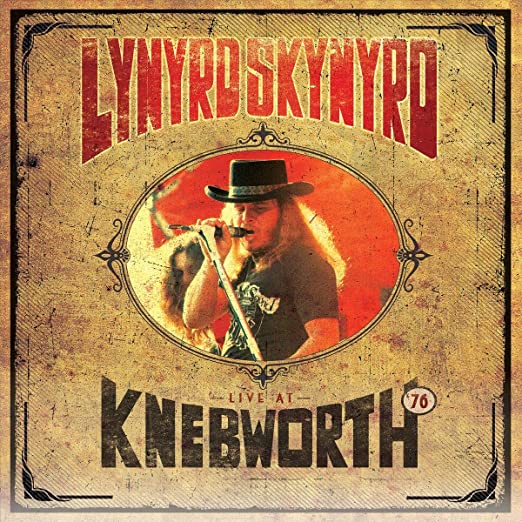 By the time Lynyrd Skynyrd appeared at the Knebworth Festival in England on August 21. 1976, the group had risen to an estimable plateau of popularity. But, in keeping with the band's increasingly tumultuous history, it had also plummeted somewhat from the commercial pinnacle of its sophomore album Second Helping (MCA, 1974) and, in the midst of a grueling tour schedule to support the subsequent albums Nuthin' Fancy (MCA, 1975) and Gimme Back My Bullets (MCA, 1976), the departure of guitarist/songwriter Ed King was only the most overt indication the band was floundering in its ability to manage all the benefits (sic) of success.

But the enlistment of new guitarist Steve Gaines had re-energized the sextet, while the further addition of background vocalists The Honkettes allowed the ensemble to replicate its studio sound on the stage. Previously only accessible via the 1996 film Freebird... The Movie (Lions Gate, 2001) and then only interspersed with interviews and other content, this concert footage is available on digital formats, CD/DVD-pack combo and Blu-ray where it also includes the full-length documentary If I Leave Here Tomorrow: A Film About Lynyrd Skynyrd (Amazon Prime, 2019).

Live At Knebworth '76, then, is the debut of the recorded performance, in its entirety and uninterrupted. The no-nonsense, non-stop performance is in keeping with the usual time constrictions of a festival setting, but it also serves the purpose of illustrating the range of dynamics Lynyrd Skynyrd had at its command at this time. Rather than simply grinding out what was a fairly standard setlist of the era, the group revels in playing for a massive audience, even though there's minimal acknowledgment of attendees, pictured on film at regular intervals, fully and enthusiastically engaged with the sounds of the band.

Based on its near-relentless touring from the previous few years alone, Skynyrd knew how to pace a set. Ergo, chunky riff-tunes like "Workin' For MCA" entice the crowd via simplicity early on even as some more intricate pieces such as "Gimme Three Steps" foreshadow the versatility revealed over the course of these sixty-eight minutes. For instance, keyboardist Billy Powell utilizes acoustic piano to add a decidedly barrelhouse flavor to "I Ain't The One," then interweaves appropriately ominous, circular synthesizer throughout "Saturday Night Special." The relative strengths of the group's originals come through here as well: "Searching" and Traveling Man" are more interesting musically than lyrically and slightly less galvanizing performances bear that out.

Juxtaposition of two cover songs here might beg the question of even better sequencing if Lynyrd Skynyrd didn't tear through them with such unabashed glee. The respective authors of J.J. Cale's "Call Me The Breeze" and Jimmie Rodgers' "T For Texas" trade in much the same blues-boogie derived changes, but the lighter country textures of Gaines' Fender contrasts with the sharp bite of Gary Rossington and Allen Collins' Gibsons. As does the latter's fluid slide work compared to the former's more staccato attack used to such good effect on the closing "Freebird."

Contrary to popular perception, Lynyrd Skynyrd doesn't really improvise too extensively on their signature song. The guitarists and keyboardist solo in turn, at an increasingly frenetic pace, over the riffing buttressed by bassist Leon Wilkeson and drummer Artimus Pyle; ostensibly more of what they just offered on the aforementioned outside material, this interplay effectively counterpoints the wistful vocal section. And with a gospel flavor the female background vocalists inject into "Sweet Home Alabama," the logic of the setlist becomes as inescapable as the cycle of video transitions becomes somewhat predictable.

Over the course of the concert footage, more varied camera angles would provide variety in keeping with the evolving performance. For instance, shots from the rear of the stage would reveal the pastoral setting in which this festival took place. Likewise, closeups of the lead singer do become tiresome, but, late in the film, when he's shown grinning with delight at the musicianship around him, those priceless moments are thankfully preserved for posterity, albeit without due credit within this digi- pak or the video menu.

Likewise, there are no bonus features on this single DVD, extra music on the CD or any insert of prose/photos included in Live At Knebworth '76. But that's in keeping with the no-frills stage presentation Lnynyrd Skynyrd offers this sunny afternoon in England, an austerity in line with other essential entries in the Dixie rockers' discography.