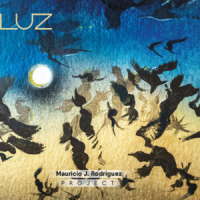 There was once a poll category called Talent Deserving of Wider Recognition. It still exists and if Mauricio J. Rodriguez is not there, he probably should be.

His peripatetic background includes Cuba, his home, as well as Venezuela and, now, Miami. He is a bassist (Six String E-Bass, Double Bass and Fretless E Bass), composer, producer and educator. He has been in the United States since 2001, and currently holds the positions of Composer-in-Residence of the Miami Symphony Orchestra and the Miami International Academy of the Bass. Rodriguez was a well-known figure in his native Cuba and his compositions have featured at the BBC Proms. It is an enviable resume.

Rodriguez performs on bass on Luz, and he is an excellent player. His compositions "Monday," "Tuesday" and "Wednesday" are all lovely, Latin fusion and striking. So too are "Casualty," "Luz," and "Vocalize" by Vicente Viloria. The vocal and vocalists are arresting as well. For the non-Spanish speaker, it would be helpful if their lyrics and, perhaps, even a translation, were included, although language is certainly no barrier to enjoyment. "My Funny Valentine" shows up in English, hauntingly performed by Adrianna Foster.

Once again, you have a recording done in multiple venues, including Santiago de Chile and Tampa, FL, but mixed in Cordoba, Spain. The result, including the album art design by Carlos Angulo, is all impressive. This is as pretty and emotive a "Latin" recording as you are likely to hear in some time. It is quite worthwhile, whatever language you happen to speak.