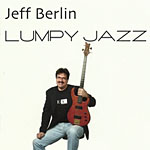 You have to really love the bass to enjoy Jeff Berlin's latest offering, Lumpy Jazz. Solos abound at every turn, his electric bass is up in the mix when keyboardist Richard Drexler is taking the spotlight, and even on "Toot's Suite," which features a guest spot by harmonica player Toots Thielmans, Berlin's sound dominates.

That said, Berlin is one of the true heroes of the electric bass, an intrepid player who emerged around the same time as Jaco Pastorius, yet didn't fall, as so many bassists did, under the larger influence of Pastorius' approach. Less influenced by soul music than progressive rock and jazz, Berlin's muscular yet nimble approach has graced records by drummer Bill Bruford and guitarist Allan Holdsworth, while he has toured extensively with artists including Yes, John McLaughlin and Billy Cobham. Lumpy Jazz is only his sixth record as a leader in a career that spans nearly thirty years, and it demonstrates that the bass can indeed be a dominant solo instrument, not just one that gets the occasional solo on an album dominated by more traditional instruments.

His most pared-down recording to date, featuring only percussionist Danny Gottlieb and Drexler (plus the one guest appearance by Thielmans), the album concentrates less on arrangement and more on the pure joy of playing. The set opens with the lyrical "Brooklyn Uncompromised," a nod, no doubt, to Pat Metheny's "Missouri Uncompromised." With Drexler doubling on acoustic bass, as he does on a couple of tracks on the record, Berlin is free to be the primary melodic instrument, soloing with an uncommon legato style that is also filled with rich chordal work. "My Happy Kids" is a more straightforward jazz tune, with Drexler stating the joyful theme on piano before opening things up for Berlin's clearly bop-informed solo. When Berlin finishes his solo on a deep low growl and then picks up a more "traditional" bass role for Drexler's solo, his taste and capability as a support player is confirmed.

In some ways Berlin's approach is like that of another dominant bassist, Victor Wooten from Béla Fleck and the Flecktones, although they share next to nothing in terms of playing style. But like Wooten, Berlin uses Lumpy Jazz to demonstrate the instrument's potential. While the timekeeping and harmonic anchor characteristics of the bass are clear and unarguable, it is every bit as vital a melodic instrument as any other. While the bass occupies the lower end of the register, in Berlin's hands it never seems out of place in a position of dominance.

And Berlin's writing, clearly geared towards putting the bass front and centre, is in turns clever, lyrical and complex. "A Mensch Among Unmentionables" would have fit comfortably in the Bruford group of the '70s, but sounds completely contemporary, as does the whole record. Lumpy Jazz proves that you can take an instrument, traditionally thought of in a support role, and bring it up front in a completely organic, natural-sounding way.

Brooklyn Uncompromised; My Happy Kids; Lien on Me; A Mensch Among Unmentionables; Almost Dawn; Have You Met Mischpucha; Toot's Suite; Everyone Gets Old (If They Have the Time); Intermezzo in A Major Opus 118 No. 2