BY DUNCAN HEINING
November 14, 2014
Sign in to view read count 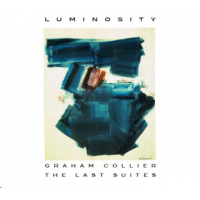 A new work, posthumously released and recorded—how many of those can there have been in jazz? Luminosity features two late works by composer Graham Collier brought to realisation through the efforts of his partner, author John Gill and conductor Geoff Warren. To say this record is a fine valediction is a statement infused with regret. These two compositions reveal just how much music Collier still had to offer.

Fortunately, Gill and Warren were able to bring together a band that is packed with Collier alumni. In fact, pretty much everyone on this album has at some point played his music and, in some cases—John Marshall, Art Themen, Ed Speight, Roger Dean, Steve Waterman and Warren, himself—the association goes back several decades.

Luminosity features both the suite of that name and The Blue Suite, both drawing upon particular Collier obsessions. Luminosity is inspired by the work of abstract painter Hans Hofmann, whilst The Blue Suite owes its debt to Miles' Kind of Blue, which was for the composer the defining example of his own belief that "Jazz happens in real time—once."

Has Collier's absence as conductor of this recording affected the outcome? Inevitably! It would have been different had he had been there, simply because he would have made different choices. Geoff Warren has, however, taken Collier's compositional materials and fashioned two works that are distinctive and coherent and which certainly still bear the composer's own stamp. In fact, Luminosity itself is as approachable and accessible as anything Collier has ever written.

Collier's aim in jazz was always to maintain the spontaneity and unpredictability of jazz in real time. He rejected firmly the approach of 'theme-solo-theme' found in so much big band jazz, realising that the composer's choice of musicians to play his or her music was itself a compositional decision in its own right. Their voices would become a key element in any composition, as would what they might do with the writing. Better, therefore, not to over-write. Better by far to devise material that maximised both the freedom of the players and that of the composer/conductor. No two performances could or should ever be the same. Most important of all, Collier trusted his improvisers.

Both works here use a number of Collier trademarks. Certain motifs and riffs could be made to appear and reappear in new guises throughout a work. This written material could be used as the main source for a musician's solo or it could inform the improvisation in some other way -texturally, harmonically or simply in terms of the mood. This, too, could be changed by the conductor's intervention or by that of other musicians. If this sounds complex or even a recipe for chaos, in fact, here and elsewhere it provided a script for some remarkable and entirely coherent music.

Each suite opens with a loosely structured and more or less freely interpreted movement which resurfaces in the middle and at the end of the suite. For The Blue Suite, this is called "Kind of Sketchy"—the reference to Kind of Blue should be obvious. With Luminosity, this piece is called "Orchestral Dominances." These short sections serve to integrate the other movements but also serve as a commentary on the work as a whole.

"Kind of Sketchy" has a vaguely Spanish hint, reminiscent of its reference point hint. It's marked by the brooding long notes of James Allsopp's bass clarinet, the simple melody of Andy Panayi's flute, and counter melodies from Roger Dean on piano and Ed Speight on guitar. With "Kind of So What," Roy Babbington takes a bass cadenza, which is followed by some 'free' playing from the ensemble before Allsopp leads the band into a section mainly built around two two-bar melodies that are repeated and varied. Roger Dean then solos joined by Panayi's flute and sotto voce brass on "Kinds of Green" before John Marshall's drums and Steve Waterman's trumpet take centre stage for "All Kinds." These are but brief elaborations of each of these sections—longer takes with more expansive solos follow later in the work. Collier's approach—and Geoff Warren's in realising it here -doesn't only give the work a sense of structure. It reflects back to Miles' original album, revealing as it does how the simple materials used by Miles, Coltrane, Bill Evans et al came to produce something unique. Here, Collier does something quite unusual in compositional terms—classical or jazz. He exposes the very architecture of the work for the listener.

When the longer versions of these pieces—along with the as yet unheard "Kind of Freddie"—make their appearance, they do so not so much as old friends but as old friends seen in a new light. Art Themen's tenor solo on the second "Kind of Green" is set up by Roger Dean's delicate piano and emerges with all that fractured romanticism of which Themen is so uniquely capable. It's a truly lovely moment that is followed aptly by Ed Speight's guitar cadenza on "Kind of Freddie," which then leads into the beautifully voiced, loping big band theme. James Allsopp's bass clarinet is again strategically placed to add a darker, ironic colour to the piece. Roy Babbington's bass again opens the return of "Kind of So What" before a stabbing brass riff appears along with the tune's original melody. There's some particularly strong playing from Graeme Blevins on tenor and Mark Bassey improvising freely on trombone over a subtly shifting rhythm section and punctuated by that same brass riff. "All Kinds" follows with a polyrhythmic cadenza from John Marshall and a staccato but strongly rhythmic solo from Steve Waterman and some acerbic alto from Andy Panayi before the final reprise of "Kind of Sketchy."

Luminosity is organized on similar lines. The ensemble, riff-led, Basie-like "Orchestral Dominances" bookends first "Yellow Hymn" and Above Deep Water" and then "Jardin D'Amour and "Blue Monolith." Each of the main sections begins with a brief cadenza or duet -Trevor Tomkins and John Marshall on percussion on "Yellow Hymn," Roy Babbington on "Above Deep Water," Andy Panayi on flute duetting with Ed Speight on "Jardin D'Amour," Roger Dean with Tayloresque flourishes on "Blue Monolith." Each tune is then expanded to allow for a series of three or four solos.

The opening of "Yellow Hymn" with its Satie-like theme might well be one of the most beautiful things Collier ever wrote but it then unfolds into an ensemble piece noteworthy for some graceful trumpet from Martin Shaw set against some poised and articulate comping from Roger Dean. Art Themen's soprano is suitably serpentine, whilst Ed Speight's chiming and melodic guitar solo seems to sit inside the rhythms of Babbington, Marshall and Tomkins only in turn to be enveloped by the brass and woodwinds. What is remarkable here is the way the same compositional materials allow for such contrasting moods, from the delicate to the robust.

By contrast, "Above Deep Water" is menacing and dark in its early passages before shifting pace and opening out with Andy Panayi's alto against two contrasting riffs from different sections of the horns. Again, the first theme returns before a shift in mood once more and a romantic piano trio interlude that leads into a fine, delicate bass clarinet solo from James Allsopp.. If there are two instrumental colours that stand out on both suites, it would surely be Panayi's flute and Allsopp's bass clarinet. In fact, the flute opens "Jardin D'Amour" whilst bass clarinet closes the movement. Two things are thrown into sharp relief here. Several players solo—Dean, Panayi, Allsopp and Speight—and do so beautifully. But what is most striking is how these improvisations intertwine and become so very integral to the splendidly lyrical composition. The same can be said of "Blue Monolith." It begins like a kind of freeform Rhapsody in Blue with Roger Dean's piano leading before another Basie-ish riff sets in offering ample space for both Graeme Blevins and Steve Waterman to do their stuff. The horn interjections also recall both Basie and Ellington but the way that Waterman and Blevins duet—trading phrases and crossing swords—is responsible for one on of the finest big band moments on what is a fine example of "jazz in real time—once."

These two suites unfold elegantly through a series of cleverly contrasting moods that are shaped artfully—and shape artfully—the contributions of the musicians. The thought that this music could be heard again but differently is one to ponder. The likelihood that that probably won't happen is in fact quite poignant. That said, if epitaph there must be, Luminosity is an exceptional commemoration of a creative life well and boldly lived.