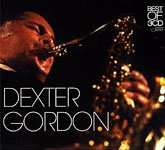 Long Tall Dexter in Baltimore, circa 1969.

The most telling thing about this disc is a political one. Inside the liner notes, in small print, are the words. "Special Thanks to Joel Dorn." Indeed, special thanks. Dorn has based his new company, LabelM, on about 300 performances he negotiated away from Baltimore's Left Bank Jazz Society that constitute his Live at the Left Bank series. It's likely that this all resulted from a quid pro quo between Dorn and Fantasy for, among others, LabelM's superb survey of tenor-organ classics Have You Had Your B-3 Today? (LabelM, 2001), that was derived primarily from the Fantasy Archives. Having said all of that, the music is classic Gordon, even if the fidelity is a bit foggy.

Recorded in the spring of 1969, LTD: Live At the Left Bank, consists of expatriate Gordon performing four tunes with a New York City pick up band that spots the great pianist Bobby Timmons. The performances are all lengthy, save Duke Ellington's "In A Sentimental Mood," that clocks in at a mere 8:41. Gordon and Timmons are the stars here, working very well together, for the most part. Gordon opens with a reprise of "Broadway," which he originally recorded on Our Man In Paris (Blue Note, 1963). While Gordon stretches out, Timmons seeks to hit his stride, which he does, on Gordon's "Boston Bernie." They both scream (after a fashion) on the closer, "Blues Up and Down," a perfect soul-jazz/hard bop delight. There can never be too much Dexter Gordon or Bobby Timmons, noo matter where they come from.

Broadway; Boston Bernie; In a Sentimental Mood; Blues Up and Down.