By GENO THACKARA
December 23, 2018
Sign in to view read count 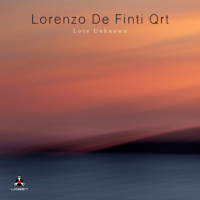 There are as many kinds of love songs as there are kinds of love itself—which sometimes makes it disappointing how often those songs fit into the same mold. As this mysterious title implies, interestingly enough, Lorenzo De Finti approaches the theme in some non-obvious ways with his Quartet's second outing. As impressive as its sophisticated predecessor We Live Here (Losen, 2016) was, the compositions (again a joint endeavor with bassist Stefano Dall'Ora) and the group's chemistry are advanced a step further on Love Unknown. It's a gripping listen touching on a variety of shades appropriate to the theme: romantic, intense, sorrowful, sometimes challenging, and even mostly content in the end.

A casual listener would be surprised to hear de Finti describe this as "a chamber music album," considering that we're treated to a soaring electro-fuzzed arco bass solo before the opener's halfway point. It's a sizzling spot worthy of a live rock show, which soon plunges into a sudden dip as the leader's piano switches gears to something more propulsively jazzy. Their smooth genre-switching is pleasantly made clear once more before the band takes off flying again. Gendrickson Mena's trumpet finds some rich haunting shades to the love theme on the next track, while the three-part centerpiece suite builds a dramatic arc from a minimalist one-note base to disturbed clattering and back again.

De Finti and Dall'Ora know the value of a well-placed crescendo to go with their alluring sense of melody. The title track smolders rather than conveying those emotions overtly, which only makes it feel that much more genuine once the piece finally builds and blooms. It helps set up a fine sequence to the finish—we end with another rendition of that sparkling opening track, which not only benefits from being an energetic live take, but packs a more resonant punch after the musical journey in between. It's a beautiful capper to a recording both ambitious and humbly heartfelt.