Dreaming of Dylan: 115 Dreams About Bob

BY DOUG COLLETTE
December 23, 2018
Sign in to view read count 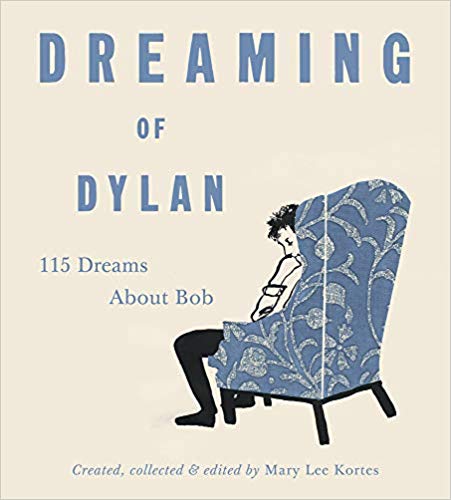 Considering the subject of Mary Lee Kortes' Dreaming of Dylan, it may sound implausible to suggest the cover reminds of nothing so much as books of Shel Silverstein such as The Giving Tree (Harper & Row, 1964). But that implicit connection, intentional or not, is wholly appropriate: all three writers invoke the whimsical side of their readers to reach into their psyches (and in turn their own).

However, 115 Dreams About Bob is primarily an object lesson in our abiding cultural fascination with Bob Dylan. Precious few other figures in any realm might legitimately qualify as the subject of such a book. Doubtlessly fans of any number of artists and/or celebrities might engender similar ruminations on the object of their affections and devotions, but few can compare to the body work he's produced over more than half a century nor ascended to that esteemed pinnacle as a symbol of ongoing creativity.

In reading Dreaming of Dylan, it helps no end to engage in that mindset so often referenced regarding fantasy of all kinds, that is, 'the willing suspension of disbelief." And not just because more than a few of these these 115 Dreams About Bob turn so alternately bizarre and/or insightful (and often carry negative connotations). But many of these mindscapes are as absurd as this iconic songwriter's own: "End Times," recounts a show taking place at the end of the world during which Dylan stops mid-set to order dinner, "Nova," wherein the dreamer is tailgating with Keith Richards and Mrs. Zimmerman's son and "Prisoners" where we find Bob and John Lennon being chased along city rooftops.

Assembled via various means of solicitation and obviously a labor of love, Kortes' book possesses a subtle a sense of organization. Inclusions with similar themes are juxtaposed-such as the pair titled "The Ledge" and, wittily, "Don't Let Me Down- while longer pieces are sequenced at intervals throughout the book, interspersed with the predominating entries, many no longer than a truncated paragraph and, in some cases, merely a short sentence or abbreviated phrase(s). As a result, like the compendium of real-life encounters, Bob Dylan: The Day I Was There (This Day in Music Books, 2018), this one hundred-sixty pages might best be read in short stints to allow savoring the writing.

That problem is, once the reading does start, it's hard to stop. So much of the content exhibits an abiding affection for its subject, the tome turns charmingly infections. The authors' admiration for Dylan is no doubt the overarching source of their vision(s) and no less so the inspiration for the artists who contributed graphics; some like those for "Walking the Room," "Storefront" and "Girl, Woman," are more vivid than the prose/poetry they accompany, but that bespeaks a certain logic too: some instrumental arrangements for Bob's material are superior to it.

With more than one contribution from some authors and precious few from the famous—Patti Smith's in fact is less memorable than that of Kevin Odegard, sideman for Blood on the Tracks (Columbia, 1975)-these many manifestations of multiple authors' subconscious minds constitute. at minimum, an object of curiosity for devoted fans of the man. But Dreaming of Dylan is also that unusual creation that will, much like the best work of the Nobel Laureate, demand regular returns. Consequently, in anticipation of such repeated handling, it was a wise decision indeed to house the contents of 115 Dreams About Bob in a durable hardcover: the initial inspection will no doubt plant seeds that will flower over time and compel (re- )visitations to refresh the memory, further provoke the mind or simply target the pleasure center one more time just for the joy of it.

Rife with specific references to songs, Mary Lee Kortes' effort will inevitably prompt Bob Dylan fans to revisit his music, though perhaps from oblique angles they might not have anticipated. Likewise, the creator, collector and editor of this latest homage to her main muse may well end up being that item that turns the non-fan too curious not to take the fateful step into his musical ouevre. Whether that was her overt or subliminal ambition matters less than the fact that such an outcome, when or if it occurs, may very well seem predestined, a "Simple Twist of Fate."