Home » Articles » Jack Kilby: Love is a Song Anyone Can Sing

By Geannine Reid
December 23, 2018
Sign in to view read count 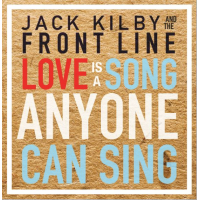 Jack Kilby and the Front Line is a collaborative effort formed in 2014 in New York City. The ensemble includes members from New York, Washington DC, and Virginia. What is most striking is the span of generations, ranging from twenty-six to forty-six. The album has been released in separate volumes but is now available as one complete recording. Volume one, released in October 2018, features the band's core sextet: Jack Kilby, the drummer and bandleader; Kris Monson on bass; Allyn Johnson on piano; John D'Earth on trumpet; Charles Owens on tenor saxophone and Elad Cohen on trombone, performing their hard bop-inspired repertoire. The second volume includes splendid guest artists who take the core sound and expand upon the group's ideas, adding a depth of execution to the compositions. The overall album is titled Love is a Song Anyone Can Sing and it's filled with technical prowess, singing melodies and seamless performances.

The title track is a play right from the Art Blakey book, with the three horns and rhythm section all playing their part to create a tune that swings. It sways in the Latin sections and the hits are crisp and together. The melody is soulful and carries the tradition with a strong purpose. Saxophonist Owens takes the ball for the first solo, scoring a melodic and technically brilliant play that is a testament to the power of the band. Cohen gets the handoff next, his big warm trombone sound is steeped in the tradition as he darts and weaves through the harmony to source a musical goal that all jazz lovers will appreciate. This is hard-bop with a modern twist and it sounds and feels wonderful. This Owens original is used as the theme for mini-interludes throughout the project, because "Love is a Song Anyone Can Sing" and Kilby shows we can all have our own way of phrasing it.

Kilby shows his diverse and open ears with his outstanding arrangement of "Jupiter" from Gustav Holst's orchestral suite The Planets. Jupiter is the Bringer of Jollity and Kilby taps into the theme and brings a joyful arrangement that has multiple sections. Joining the band is Antonio Hart on alto saxophone, Peter Del Grosso on french horn, and Marcus Tenney on trumpet. Hart's solo statement is epic. The band follows him as he pushes the energy higher and higher. The creativity of this band is outstanding; everyone involved is technically skilled and speaks a wide-ranging language of jazz. The addition of french horn was a great choice and adds to the ensemble color, especially in the main themes of the movement.

Overall, Love is a Song Anyone Can Sing is as diverse as the title suggests. Love is certainly a subjective emotion that speaks to each individual differently. Kilby has constructed a well-oiled large ensemble to carry out his spectacular ideas with panache. From a re-imagination by vocalist Christie Dashiell on the R&B inspired "Pure Imagination," to "Colors of The Wind," which also features Mark G Meadows on piano and Braxton Cook on flute, to Front Line members performing an humorous ode to Lester Young, the album adds up to a delightful listen from beginning to end. Love is a Song Anyone Can Sing certainly is a strong and meaningful debut by Jack Kilby and the Front Line.