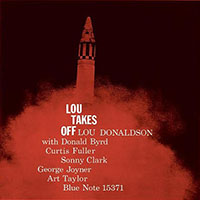 A cadre of young musicians, each who would, in time, evolve into a master, is caught as they begin to shine early on for this fireball 1957 set. A thinly disguised take on Cole Porter's "What Is This Thing Called Love?" is the opening tune, altoist Lou Donaldson's "Sputnik." It launches matters at full throttle, with Donaldson unmistakably reflecting Charlie Parker's then still very fresh and vibrant influence. Joining the pulsating rhythms is a young Donald Byrd, whose ebullient trumpet intonation makes for a perfect complement to Donaldson's sweet bop heat. Adding more flavor is a strong rhythm section driven by the breathtaking marathon-paced drumming of Art Taylor.

A bop classic, Charlie Parker's own "Dewey Square," includes a showcasing solo from the too-soon-gone Sonny Clark, who was already displaying his rhythmically sophisticated and seriously playful piano. Easing in and out smoothly on the tune is Curtis Fuller, who was already demonstrating the JJ Johnson-influenced technique that, as composer and trombonist, has led to his playing with a galaxy ranging from Miles Davis and John Coltrane to Count Basie and many more. On another Donaldson piece, "Strollin' In," Fuller's sound is so varied and sweet it's as if he's just invented a new instrument. And Clark's piano is so mesmerizing one can only regret, again, that his life was so short.

If Lou Takes Off is not an essential set, it is a fascinating one, if only historically. It's a welcome opportunity to savor a steaming, vivid and fascinating session when a band of young lions were clearly on the verge of greatness.