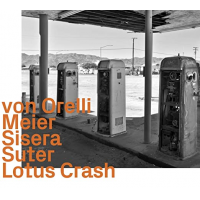 Recorded live at venues in Switzerland, the respective musicians comprising this quartet have made the rounds across Europe's fertile progressive jazz scene as leaders or valued sideman for numerous entities, largely focused on generating an outside-the-box schema in various shapes, forms and colors. The band translucently shifts paradigms while bringing a signature mode of attack to the table, firmed up by bassist Luca Sisera's stout and lyrical lines amid the quartet's undulating deconstruction and rebuilding processes. Moreover, trumpeter Marco von Orelli and saxophonist Tommy Meier's sinewy groove-driven unison choruses along with odd-metered detours combine a sense of normalcy with offsetting maneuvers.

Sheldon Suter's brisk and fluid drumming generates quite a bit of pop and nuance. And on works such as "Part of a Light" the band renders spiffy linear progressions, as the bassist and trumpeter traverse a horde of snaky mutations. Yet during other movements throughout the album the band takes its time to explore and reinvent, accomplished with various tempi. Occasionally, they underscore some of Ornette Coleman's free bop escapades, although they alter the pace on "Maiduguri," commencing with a requiem-like gait, moving towards a steady pace, but colorfully contrasted by Meier's bass clarinet phrasings atop the rhythm section's looping ostinato, and consummated by the hornists' bluesy intonations.

The final track, "Wittgenstein," is nestled in the free zone, featuring the soloists' gritty theme-building exercises, heightened with a rampage of sorts, where they thrust matters into 10th gear via a catchy melodic hook. Simply stated, the musicians cover a wide gamut of jazz-induced genre-bending activities sans any hint of filler material.