Los Hombres Calientes: Live at the House of Blues

Stops you in your tracks. And yet, you can still dance to it. 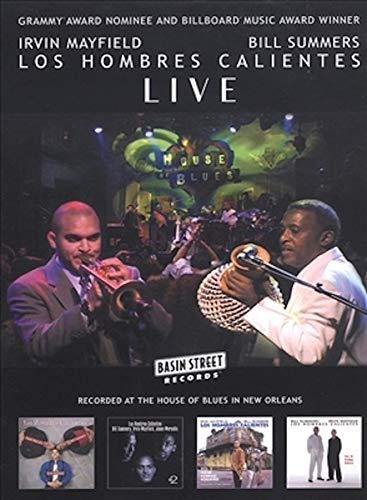 Recorded at the House of Blues in New Orleans, this performance features a hot band exploring Latin Jazz from both a veteran's viewpoint and from advanced studies of the genre. A performance by Los Hombres Calientes means improvisation over Jazz themes, traditional dancing, and soulful singing.

Between songs, Bill Summers and Irvin Mayfield explain their direction. As lifelong students of the music, they've traveled throughout South and Central America to record with indigenous musicians and to uncover the real roots of Latin Jazz. It's all incorporated in their performance.

Summers is the consummate percussionist. He provides the shades and colors that envelop each selection. He works closely with pianist and bassist to carry a hearty rhythmic foundation throughout the concert performance. New Orleans means celebration, and Summers ensures that every bar of music is jam-packed with various colors of rhythm.

Mayfield is the band's Dizzy Gillespie. Casual and relaxed, he leads the band in an explosive series of thrills. The power and soul in his trumpet performance stops you in your tracks. And yet, you can still dance to it.

The band grooves collectively and stretches out individually, making sure that the music swings while drawing upon roots from many sources. Mayfield's "Creole Groove" summarizes it all. A hundred years of New Orleans Jazz gets votes from each decade. Rock, Soul, Swing, and a Latin tinge come together for this outstanding performance.

The video isn't without its shortcomings. The camera omits much of the House of Blues audience interaction. The camera is late to focus on several solo efforts, and one of the cameramen can be seen on stage a few times. Much of the session is filmed too close for comfort. But the music comes first and foremost. Well-placed microphones pick up the music exquisitely. In order to appreciate this kind of Latin Jazz performance fully, however, you've got to see it. And this DVD puts you right up there, on stage, to enjoy the power and the feel of this action-packed band.

Mayfield's closing cadenza leaves his audience in astonishment. It comes at the very end of an enchanting "Night in Tunisia" that began with traditional Cuban chant and a family spirit. At Summers' urging, everyone in the room becomes a part of the night's magic. Audience member becomes participant. Then Mayfield picks up the horn and adds something different: circular breathing. The camera picks it up in vivid detail. Recall that Rafael Mendez was called the greatest trumpeter in the world, in part because he used circular breathing to perform unthinkable passages. Here, Mayfield finishes the band's best performance of the night with a searing trumpet cadenza that allows him to fly with machine-gun valves seamlessly for an extended period of time. His closing statement honors the memory of Dizzy Gillespie, and makes a suitable dessert for this banquet of New Orleans delights.