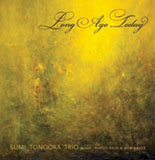 Players as acclaimed as Uri Caine speak highly of their fellow Philadelphian, pianist Sumi Tonooka, who deserves a far wider hearing but works at her own pace. Long Ago Today, her first leader date in 10 years and her fifth since 1990, is accurately titled in the sense that it was recorded back in 2004. Sadly, drummer Bob Braye died in the interim. But thanks in no small part to him, the music from this trio session pulses with life. Bassist Rufus Reid, Tonooka's longtime musical associate and by far the best known of the three, completes the lineup.

Tonooka made a gripping appearance on Reid's Live at the Kennedy Center, a 2007 CD/DVD package from Motema. Her firm attack and lush, off-centered harmonic palette had much to do with the Reid quintet's appeal and the same qualities permeate her trio music. On "Be the Dance," the leadoff track, she and Reid play a bass melody in coordinated, springing forward motion—the very model of ensemble counterpoint and rhythmic confidence, a nugget of jazz modernist perfection.

Having commanded attention, Tonooka carries on with eight more original tunes. But first she reads Cole Porter's "All of You," departing from Miles Davis' definitive version. Rubato musings over brushes give way to subtle reharmonization and arching, chromatic bass figures played in unison with Reid. It's this kind of consistent piano/bass chemistry that underlies the album's success.

In the fragmented theme of "The Clinging," traces of McCoy Tyner's "Effendi" can be heard, Tonooka's Philadelphian forebearer. "Renewal," a 24-bar extended blues, harkens back to the swinging fanfare of the opener. "Dreaming of Tibet" and "Moroccan Daze" evoke worlds beyond jazz. During the latter, Tonooka moves from tense 7/8 to flowing 3/4; her surprise solo piano interlude abounds in dissonance, rhythmic and melodic. The title track and the closing "Nami's Song" inject a calmer, more introspective feel, just as integral to the set.

Be the Dance; All of You; The Clinging; Dreaming of Tibet; Quantum Question; Long Ago Today; Renewal; Morrocan Daze; Just for Now; Nami's Song.