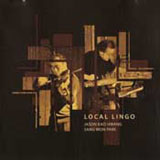 Hwang uses several styles in his compositions. He writes in the pure tones of classical music, lets free form find its space and takes Korean folk tunes into a modern realm.

Ari Rang is a six hundred year-old Korean tune that is reinvented. The innate beauty of the melody is laid open by Hwang, while Park plays the kayagum—a twelve-stringed Korean zither that is plucked and serves to counterpoint the melodic lines. He also sings, the cadence in his voice enhancing the flavor of the song. Hwang dips into several nooks along the way, a little bit of swing, a classical air, and in a surprising, but nevertheless delightful move, he roves into country music. His playing is light and airy, dense and dark, creating an arresting portrait.

Listen is the perfect showcase for the way that Park and Hwang create and build sonic texture. They converse in gentle tones with Park on the ajeng. Park takes an intense and angular trajectory in contrast to the sweet tones of Hwang. Yet when they get together the disparate elements disappear and the get together smoothly. Invention is in constant evolution, from the high notes of the violin to the percussive taps on the strings of the ajeng, to the injection of the melody and its swift evaporation.

Local Lingo is seductive and captivating.