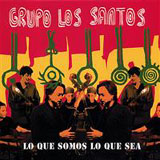 Grupo Los Santos is a unique band. Its music is Latin through and through, and yet the musicians come from varying backgrounds. Guitarist Pete Smith has played with Norah Jones, Donald Byrd and Andrew Hill; bassist Dave Ambrosio has recorded with Uzbek and Kyrgyz folk musicians; saxophonist Paul Carlon leads his own band, playing everything from straight-ahead jazz to funk; and drummer William "Beaver" Bausch rounds out the core quartet, and is probably the most experienced in Latin musics. What they all share, however, is a certain raw energy that is front and center at the band's live shows and comes across well on record.

Lo Que Somos Lo Que Sea (What We Are What Will Be), the group's second album, is first and foremost a jazz album. These are simply jazz musicians who share a passion for the Latin musics including son, rumba and bossa nova. But make no mistake, they are certainly capable of holding down a Latin (and any other sort of) groove.

"Rumba in the Bronx" commences the proceedings in understated fashion. The drums and percussion establish the groove, while the rest of the instruments slowly layer themselves in. Drummer, percussionist and Rumbatap pioneer Max Pollak, unofficially known as the fifth Santo, joins the group, and his contributions do not go unnoticed. The tune is aptly named, with a groove and a melody evoking the New York borough.

What is remarkable about this record is that at no point does the listener feel as if a band member is soloing. The group plays so fluidly together that each instrument is merely a layer adding to the overall sound. And the result is greater than the sum of its parts, as is the case with "Manna" and "Clave 66"—the former a more composed tune allowing the group to tackle some complex lines, the latter a long and winding journey, allowing each band member to flesh out his chops, with Smith's long, rhythmic solo the highlight of the album. The guitarist begins by evoking Kurt Rosenwinkel with his simple, contrapuntal soloing, and subsequently breaks down into a sort of funky riff, eventually building up to a crescendo that is well supported by Bausch.

Lo Que Somos Lo Que Sea is a solid, interesting album from a very capable band that is deserving of more recognition. Few of the melodies are incredibly catchy or memorable, but the compositions and playing are of the highest quality and the band is remarkably tight for all the energy it brings to the table. The album holds the attention throughout and will appeal to Latin and straight-ahead enthusiasts alike. More will be heard from Grupo Los Santos.