Home » Jazz Articles » Jethro Tull: Living With The Past 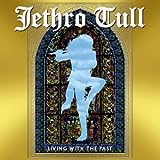 With the latest rendition of “Tull” – we find keyboardist Andrew Giddings effectively employing an assortment of synth-based textures for the series of works recorded at Britain’s “Hammersmith,” venue. Longtime “Tull” guitarist Martin Barre remains in the current lineup, while the listener will also have an opportunity to hear the original 1968 unit realigning for some blues-based pieces. And while Ian Anderson may no longer appear to be the longhaired court jester, his distinctive vocalizing and superb flute work remain intact. However, the driving force behind this effort resides within the musicians’ spirited renderings (amid a few cleverly articulated deviations) of such classics as “Aqualung,” and “Nothing Is Easy,” among others. The group also utilizes a strings section for the “Acoustic Session,” as all of these performances were captured on film for a scheduled DVD release. Hence, a vivid and inspiring portraiture of this time-honored progressive rock aggregation!

1.Intro 2.My Sunday Feeling 3.Roots To Branches 4.Jack In The Green 5.The Habanero Reel 6.Sweet Dream 7.In The Grip Of Stronger Stuff 8.Aqualung 9.Locomotive Breath 10.Living In The Past 11.Protect & Serve 12.Nothing Is Easy 13.Wond