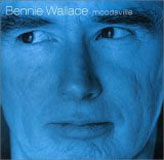 Here's another set of standards, a bunch of songs out of The Great American Songbook. The line-up: Tenor sax out in front of the piano/bass/drums rhythm section. Nothing earthshaking here...

But it's done on this Moodsville, with such style and reverence, with a distinct muscular-toned tenor flavor.

The three rhythm guys on the disc—Mulgrew Miller on piano; Peter Washington, bass; and Lewis Nash doing the drum chores—are all better known in jazz circles than leader/tenor man Bennie Wallace, but Wallace's talent keeps pace with his bandmates. He has put out a couple of fine CDs on the Enja label, another two on Blue Note; and also has done the sondtracks for the movies "Blaze"(1990) and "White Men Can't Jump" (1992). He has a deep, throaty, Coleman Hawkins-like tone, and an energetic and sometimes edgey, Dolphyesque approach to his soloing that contrasts beautifully with his relatively smoother accompaniment. The leader/rhythm section tug-of-war is what makes the music. Mulgrew and crew at times—smilingly—seem to be in a reigning-in mode with leader Wallace—to the benefit of the music. Wallace sounds like a free blower ensnared—happily—in an environment that is holding him back, just a bit. Melody is king here, though Wallace stretches it at times.

The songs: "I'll Never Smile Again; "Dizzy's Con Alma"; an "April In Paris" that'll have you reaching for your "Hawk In Paris" CD, to contrast Manny Albam's lush orchestrations with Wallace's pared down approach; a reverent version of Miles Davis's "Milestones"; a hopped-up, Latinized take on Cole Porter's "Love for Sale": a couple of lovely (but aren't they all) Strayhorns: "Little Brown Book" and "A Flower is a Lovesome Thing".

A fresh and distinctive revisitation of some American Classics, a must have CD for fans of Coleman Hawkins or Dexter Gordon's quartet work.

I'll Never Smile Again, Con Alma, April in Paris, Milestones, When a Man Loves a Woman, Love for Sale, My Little Brown Book, I Concentrate on You, A Flower is a Lovesome Thing.