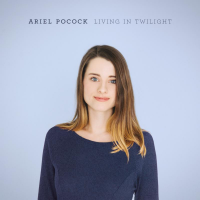 When the sun rests below the horizon, the sky sits in a limbo state represented by a wondrous ambiguity in color, content, and intention. An intoxicating afterglow emerges, both wishing the day a fond adieu and ushering in the night. It's that variegated realm, an in-between locale that's neither here nor there, that inspires pianist-vocalist Ariel Pocock's musical musings and offers much satiating food for thought on this young talent's sophomore release.

The gloaming state cited in the album's title serves as something of a parallel for the crossroads where Pocock, currently in her mid-twenties, now stands. Life can often remain a series of open roads at that stage of the game, but the individual's inner-GPS doesn't necessarily provide the answers about which route(s) to take. That's where the soul-searching comes in and that's what Living In Twilight is all about.

Pocock put together an all-embracing set that simultaneously marks her as a reflective and questioning soul with an open mind and an artist with a confident and strong vision of self. Whether reharmonizing a nugget from the Great American Songbook, dancing on Brazilian turf, tapping into the music of modern pop masters, or exploring her own work, she remains a riveting presence. Pocock's musical partners—bassist Adrian Vedady, drummer Jim Doxas, and guest guitarist Chico Pinheiro—share in her outlook and put their skills to good use throughout, impressing with their own work while seeing to it that she gets the showcase that her voice and piano playing so richly deserve.

The three songs that appear at the top of the program serve as a fine illustration of Pocock's varied interests and influences. First she taps into jazz bedrock, putting her own thoughtful and comfortable spin on "The Very Thought Of You"; then she looks decades ahead of that tune, painting a lush rubato introduction and settling into a swaying flow on Chick Corea's "500 Miles High"; and finally she jumps to the present with the Kendall Moore-arranged title track, a song composed by indie-folk pop duo The Weepies.

The sources for the aforementioned material come from far and wide, but Pocock brings her unifying touch to all three performances. She truly has a way of making any song her own. That's obvious when her wordless vocals take the lead on Egberto Gismonti's "Saudações," when she puts together a lyrical and grooving take on Sufjan Stevens' "To Be Alone With You," when uncertainty is used as a doorway into a delicate yet excitable "When You Wish Upon A Star," and when the message in Kate McGarrigle's mostly lachrymose "Go Leave" miraculously manages to be amplified and simplified in an incredibly focused take. Add to that list several self-penned tales—the observational "So Long," the Gonzalo Rubalcaba-influenced "Gonzalo's Melody," and a stately-turned-impellent-turned-stately "Hymn"—and you get an even deeper picture of Pocock's wide-ranging yet centered musical persona.

Infinite options may sit before this artist in bloom, but that's a blessing, not a curse. For now she's exploring as many avenues as her artistic reach will allow for, and that's quite a lot. Twilight seemingly knows no end or limits, and the same can be said for Ariel Pocock.

The Very Thought Of You; 500 Miles High; Living In Twilight; So In Love; Someone Like You; Saudações; So Long; I Love You; To Be Alone; Gonzalo's Melody; When You Wish Upon A Star; Hymn; Go Leave.