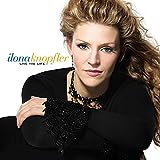 Beaucoup plaisir awaits on this English and French jazz vocal new release. Ilona Knopfler, born in Paris but a pre-school world traveler, made her stage debut at the age of fifteen in Hong Kong and later became the house favorite at the Jazz Club in Hong Kong. Moving to New York, Knopfler studied for five years at the Lee Strasberg Institute. This album was recorded in both New York and Paris.

Live The Life begins with the unlikely gospel anthem of the late Thomas Dorsey, "I'm Going To Live The Life I Sing About." After the stated vocals, a stunning French vocal duo of Knopfler and Kim Nazarian (from New York Voices) emulates the stylings of the Blue Stars of France quite effectively. That is followed by a cooking alto solo from Antonio Hart. Immediately on the way is the next tune, "Comment Allez-Vous," a signature piece of Blossom Dearie, who coincidentally founded the Blue Stars in the early 1950s.

Many well-chosen songs in both English and French ensue, and all are treated with respect and the appropriate feelings of swing or tenderness. We can include in that group Bob Dorough's "But For Now," Monk's "Ask Me Now" (with lyrics by Jon Hendricks), Abbey Lincoln's "Throw It Away," and Charles Aznavour's "Parce Que." "Dansez Sur Moi" is a French lyric for the 1960s jazz standard "Girl Talk," and "Le Jazz Et La Java" is Dave Brubeck's "Three To Get Ready" (from Time Out), with Knopfler singing vocalese beautifully against the horns, followed by a fine Sean Jones trumpet solo. "Les Moulins De Mon Coeur" is a French translation of the Alan and Marilyn Bergman hit "The Windmills of My Mind." "No Tomorrow" is an Ivan Lins composition with lyrics from Peter Eldridge. The haunting ballads "This Is Always" and "Alone Together" are also highlights.

Producers Jay Ashby and Al Pryor should be proud of this fine album showcasing the talents of Ilona Knopfler. I have no idea what her 2003 debut for Mack Avenue, Some Kind of Wonderful, sounds like, but on paper the selections all consist of pop and rock tunes.

Visit Ilona Knopfler on the web.

I'm Going To Live The Life I Sing About, Comment Allez-Vous, But For Now, Ask Me Now, Throw It Away, Dansez Sur Moi, Le Jazz Et La Java, This Is Always, Parce Que, Alaone Together, Les Moulins De Mon Couer, No Tomorrow.