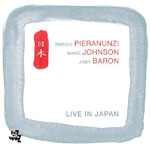 I suspect that at least a gazillion electrons have been sacrificed to the obvious influence that Bill Evans had on Italian pianist Enrico Pieranunzi...and I am going to offer up a few million more. Pieranunzi is well-studied in the Evans musical method, even establishing a temporal connection to Evans through bassist Marc Johnson, who performed with Evans on the late pianists final monolithic sets, Last Waltz and Consecration.

Johnson has show up regularly in Pieranunzi's groups, documented on Untold Stories, Ballads, and Play Morricone. The latter of these employs drummer Joey Baron, collectively making up Pieranunzi's current trio performing on the two-disc Live in Japan.

Enrico Pieranunzi is that rare combination of scientist and poet, a musical Galileo who plays with a quiet certainty and powerfully invisible confidence. To end my comparisons with Evans, where Evans was painfully introverted, Pieranunzi is potently, but not overbearingly, extroverted. Pieranunzi's compositions and performances are concrete and perfectly conceived, lacking the vaporous aphorisms characteristic of Evan's playing. Compositionally, the trio's recital is devoted to the pianist, the trio, and a favorite Pieranunzi composer, Ennio Morricone.

The trio carefully crafts its collective efforts empathically, as easily as breathing. If it is even possible for a trio to be more comfortable than Keith Jarrett's Standards Trio it is this one. Pieranunzi, Johnson and Baron sound genetically linked to understand one anothers' dynamics, strengths, and weaknesses, if there are any. Each member is equally generous in their allowance of solo time to the others as well as their support of each other in such. All solos sound perfectly placed, never allowing the performance to sound rote and become boring. This recital seems so perfectly conceived and executed that it defies any meaningful analysis except that it is one of the finest trio recordings of 2007.

CD1: Aurora Giapponese; Impronippo; How Can You Not?; If Only For A Time; Mio Caro Dottor Grasler; Musashi; Improleaves. CD2: Winter Moon; Broken Time; Tokyo Reflections; Nuovo Cinema Paradiso; Ninfa Pleba; When I Think Of You; Improminor.