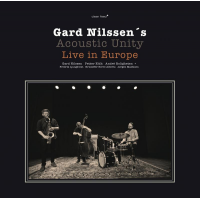 Norwegian drummer Gard Nilssen formed Acoustic Unity back in 2014 to assuage his desire to compose and lead in a pure jazz setting. The initial get together with saxophonist Andre Roligheten and bassist Petter Eldh was so successful that it yielded the well-received Firehouse (Clean Feed, 2015). That achievement gives rise to an audacious gambit for the trio's second release, which comprises three CDs worth of live performances from European festivals in the summer of 2016. In order to broaden the palette, Nilssen invited guests to augment the band for two of those dates presented here.

Like many of the other groups in which Nilssen participates such as Cortex or the Zanussi 5, Acoustic Unity mines the rich seams uncovered during the 1960s American New Thing, but brings contemporary sensibilities to bear and finds something new to say as a result. Across the three sets they explore a common repertoire drawn from the pens of the three principals, though no set is precisely the same in terms of make up or pacing.

Two titles appear in every setlist, another five titles on two occasions, while only three numbers get a single airing. Most of the concisely plotted tracks reside in the 4-5-minute range. As Nilssen says in the liners, the pieces are relatively simple such that guests can engage without too much difficultly and so it proves.

Fortunately one of those regulars, "Hymne/Roundtrip," also provides one of the highlights on each disc. It starts with the leader's roiling drums establishing the mood before an impassioned hymnal (unsurprisingly) which evokes Albert Ayler, a connection reinforced by Roligheten's wide vibrato on tenor saxophone. With the other horns on board, a loose polyphony ensues, especially when supplemented by the twin tenors of Kristoffer Berre Alberts (from Cortex) and Jørgen Mathisen (from Zanussi 5, Krokofant) in Oslo. Thereafter they take a more conversational approach, which spawns rousing turns, from Roligheten in particular.

Across its three versions, the tune also illustrates two of the album's other characteristic traits: the arrangements do not differ dramatically even with guests in tow; and they make effective use of bass and drum soliloquies as transitions between pieces, as each rendition ends with Eldh's darting pizzicato physicality forming a bridge to the next number.

Imaginative writing throughout derives the most from the core instrumentation. It's never all out blowing. There's always reference to the compositional framework. And that holds for the guests too. With reedman Fredrik Ljungkvist, best known for his role in Atomic, in harness in Ljubliana, there's lots of entertaining give-and-take between him and Roligheten, obvious right from the outset in the jousting and interweaving on "Summer Ale."

Ljungkvist is perhaps the more direct of the two, something seen to good advantage as he spirals into snarling overblowing on "Gammal Rottegift," generating an exhilarating climax in the dog whistle register once Roligheten rejoins. He proves equally adept when the pace changes too, melding his clarinet into the pastoral lilt of "Salad Days."

The Oslo date is the pick of the bunch with the two additional reedmen ramping up the excitement yet more. But even when all the horns get a chance to spread their wings as on "Mormor," it's done in such a way as to avoid a sequence of solos by rote. Alberts on tenor holds forth during the introduction, then after the theme statement, where Roligheten exploits the leeway of the added heft to extemporize more fervently, Mathisen enjoys a gruff tenor outing, followed by a snake-charming soprano outpouring from Roligheten, which incites and squeals over the reprised unison before the close.

Other peaks include Roligheten's "Zig Zag" which features a crisply garrulous exposition from the drummer and a gnarly unaccompanied break from Mathisen, and the closing twists of "Adam's Ale" which allows Alberts on baritone and Mathisen on tenor to stretch out. But all the performances are pleasing and attest to the fact that this is a great live band.