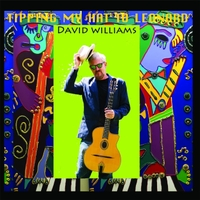 When thinking of powerful, challenging lyrics, "gypsy" jazz rarely comes to mind. David Williams is out to change that one song at at time. The Emmy award winning songwriter's CV is impressive to say the least; he has worked for PBS (how he won his Emmy), written multiple books on topics ranging from poetry to neuroscience and taught as a university professor, all while continuing to play gypsy jazz. However, after a divorce, Williams moved to Nashville for a new start.

His latest record is a reflection of his love for American giants of songwriting like Bob Dylan, Tom Waits and Leonard Cohen. It was his homage to Cohen, for which the record is named, that inspired the 16 song collection that covers a wide variety of themes and styles.

The title track, "Tipping My Hat to Leonard," is a playful, earthy swing ballad with more than a hint of Cohen's vocal style. The lyrics reference his work in name and in spirit, name checking the masterpiece "Hallelujah" while questioning the purpose of songwriting and life at the same time.

The record isn't all heavy themes by any means, though. "Little Tiny Foreign Car" couldn't be more light hearted if it tried. The heartfelt performance and simple instrumentation could put anyone at ease.

There is some pretty decent playing on the record as well. The hot jazz reminiscent "Baby Lost Her Kitty" has some solid gypsy rhythm section playing and a couple of high energy if not virtuosic solos from Williams on guitar and clarinetist Bill Pontarelli.

Every track on Tipping My Hat to Leonard is rich with colorful, evocative lyrics and solid gypsy playing. The lyrics alone warrant multiple listens while the playing lays down a firm foundation. Fans of John Prine will greatly enjoy this thought provoking record.