By Bruce Lindsay
January 13, 2016
Sign in to view read count 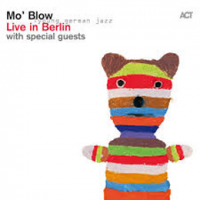 It's over a decade since funk quartet Mo' Blow formed and those ten years have given the band ample time to develop its skills as a tight, dynamic, outfit. Live In Berlin is the band's first live album and its third album on Germany's ACT label. The live situation is where Mo' Blow clearly flourishes, as it revisits its back catalog to deliver a punchy set of tunes.

With the exception of Adele's "Rolling In The Deep" the tunes are all originals. Almost without exception, the Mo' Blow approach to these tunes puts funk squarely at the center—Matti Klein's Rhodes and Tobias Fleischer's bass guitar at the core of the sound especially on saxophonist Felix F. Falk's "Ricky The Lobster." It's a fun, danceable, sound that gets a suitably enthusiastic response from the crowd at Berlin's A-Trane, where the album was recorded.

The addition of guest performers on most of the tracks helps to minimise the risk of repetition that can plague recordings by less savvy funk outfits. However, it's notable that even the 10-minute-plus quartet number "Call Me Milroy" holds the listener's attention without the aid of a guest, thanks to inventive soloing from all of the musicians and the sheer energy each player brings to the performance.

"Rolling In The Deep" begins slowly, Nils Landgren's plaintive voice suggesting a ballad's in the offing—but he soon declares that "We're getting funky in the house..." and Mo' Blow gets back to business, the funk getting even tougher than usual thanks to Landgren's rasping trombone. Pat Appleton's passionate vocal on "No Particular Way" (which she wrote with Klein) adds a bluesy vibe, Franz Bauer's vibes bring a light swing to "Along Came Mag" and Kacper Smoliński's harmonica combines with Falk's throaty baritone to drive "Fried Chocolate." Landgren appears for the second time on "Gimme The Boots," a sure-fire crowd pleaser with the already high energy cranked up even more as the crowd joins in with the refrain.

Although Falk's "Count XVII" opens with the composer on digeridoo, Klein's "Ray" is the album's most intriguing track. Featuring violinist Adam Baldych, in rollicking form with a dynamic solo as well as calmer passages of pizzicato playing, the track also brings a shift in tone from bassist Fleischer and a downshift in tempo that gives it an uncharacteristically downbeat feel.