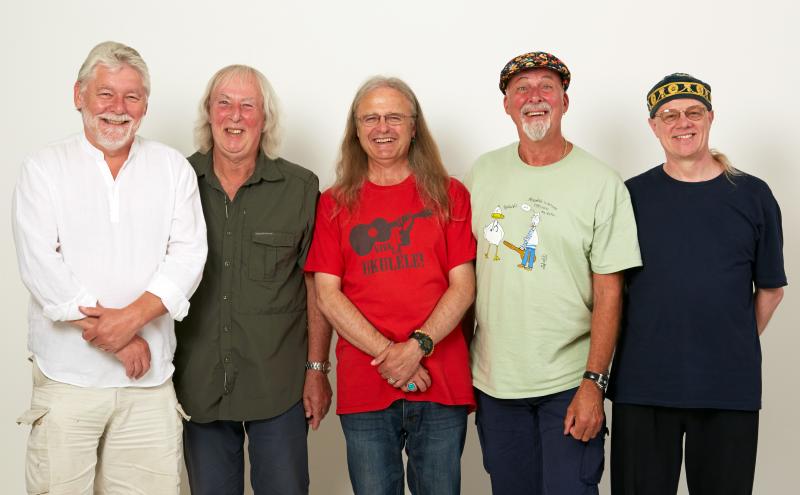 Inexplicably, it seemed that around a third of the seats for this full-house gig was taken up by an all-female Norwegian posse. Even if they hadn't made this choice, it's highly likely that Canadian trio The East Pointers would have sold out the room regardless. Their many-date UK tour is the third storming of these isles, and the rootsy troubadours have been gathering in popularity. Catching their vigorous, communicative performance, it's easy to see why this is the case. These Prince Edward Islanders have the practiced rapport of hardcore road-creatures. They synthesise a host of Celtic traditions from Ireland, Scotland, England and France, selecting old-time tunes to interleave with their large percentage of original compositions. The line-up is fiddle (Tim Chaisson), guitar (Jake Charron) and tenor banjo (cousin Koady Chaisson), with all three players also singing, either lead or ensemble-style.

All three Pointers play standing up, intent on immediately establishing the night's intensified power mode. The bolting start was also aided by the fiddling Chaisson's 'tim-bourine,' a patented device with a tambourine nailed to a wooden base, tiny casters built into its underside. This, combined with an amplified stomp-board, helped drive their songs into the audience clap-along zone. The Chaissons have emerged from a heavy family background of music-making, with myriad cousins and nephews involved with the Prince Edward folk scene. They delivered "Blainey's Laughing Eyes" a capella, then barrelled into a funked-up stretch with a banjo foreground. Fiddler Tim took most of the lead vocals, banjoman Koady's 11 years of lobster fishing didn't distract him from string dexterity, skating around the frequently nifty time changes. At times, this racing intricacy started to confuse the clappers, so they were forced to cease and just let the band continue in their zipping progress, solo dominance continually alternating between each instrument. Perhaps the overriding influence came from Irish music, once all the tunes had been totted up. As the pair of sets neared completion, "Secret Victory," a set of jigs, and "The Wreck Of The HMS Phoenix" were late highlights, the latter taking a turn towards sparseness.

Down from County Durham, Bob Fox impressed with his communicative vigour right from the outset, an accelerated guitar progression spurring on his own deeply resonant vocal run, relishing the challenge of a complex syllable- spill. His swift-pickin' sounds like it's born of a banjo-fantasy. Fox spent a lot of time tuning his strings, having abused them with the tensile testing of his fleet fingerings. He charged through a train song, Ewan MacColl hanging on for dear life, paused to introduce his ebullient stand-up comedian tactics, Fox also being a fast man with a witty insight. Or he'd give an explanatory introduction that was destined to be longer than the following song. A prime example of this was "The Ballad Of Jack Crawford," but the audience had no cause for complaint.

Until around a year ago, Fox had been playing the Song Man character in the War Horse musical play, interpreting the songs of John Tams. These formed a healthy part of the evening's two sets, with Fox beginning this stretch on his second number. One of the demands of that production was that he learn to play the melodeon in six weeks, a frightening task that he made seem highly amusing. In an act of defiance, he's even kept one of those songs in his set, proceeding to accompany himself at a lollop, on said squeezebox. He threw in a ditty in hardcore Geordie dialect, a rare love song from Gateshead, challenging the audience to sing along. Fox confessed that, during a four decade career, he's never really been adept at penning his own songs, but fortunately his taste is refined when picking out likely contenders, including a selection from his Dreams Never Leave You, the 2000 solo debut album that Dave Pegg recorded following Fox's opening act stint on a Fairport Convention tour. He then climaxed the evening with one of the many folk songs concerned with cross- dressing, which was a bawdy highlight.

Unlike most hoary old combos, Fairport Convention are very much concerned with the recent past, meaning the prominence of their latest album, Myths And Heroes, released just over a year ago. Their two-part set was heavily devoted to this newer material, in a fashion reminiscent of The Fall, who have a history of sticking to the contents of their latest opus. For a band that's been together for almost five decades, this is an admirable approach, although perhaps frustrating for those audience members who haven't witnessed them with great regularity.

The Fairports may well be a more sedate proposition now, compared to their early days, markedly influenced by the psychedelic blues of the late 1960s. Often, complaints might be made when various bands attempt to rock out by hiking the volume up past the natural capacity of a room, but this gig featured a sonic level that was almost troublesomely hushed. It took a few numbers to adapt. Mainman founder Simon Nicol's electric guitar was often cast in the role of introverted rhythm generator, with the bulk of the showy solos handled by violinist Ric Sanders and mandolin/bouzouki specialist Chris Leslie. At first, the performance was lacking in energy, as if this constantly on-the-road bunch were merely trucking through the motions of the songs. This was a gig that allowed the punter to settle in slowly, gradually appreciating the song-craft, admiring the instrumental changes. These were mostly down to Leslie's switchings, but also with Nicol alternating on acoustic guitar, and the lead vocal duties swapped around for greater variety.

The Grand Opera House is one of their favourite venues, so Nicol sympathised with the damaged ground floor areas, due to the recent severe flooding of the River Ouse. Otherwise, most of the banter was humorous, with Nicol bouncing witticisms between Ric Sanders and almost-original partner, bassist Dave Pegg. Sanders nearly went over the top with his Monty Pythonesque meanderings, but Pegg supplied the earthier chuckles. Lifted from the latest album, "John Condon" formed part of a 'military history' trilogy, such subject matter undergoing a surge of popularity on the folk scene at the moment. A couple of instrumental sets allowed a harder roots thrust to emerge, focusing on the Sanders and Leslie soling abilities. Even the older tunes were quite recent, with a focus on The Festival Bell, from 2011. It took until the end and the encore before they hit "Matty Groves" and "Meet On The Ledge." It was a sturdy performance, with a steadily increasing substance, but there were few flashes of inspiration evident, not that this prevented a relaxed sense of enjoyment.