Live From Birmingham: The Mavericks, Hawkwind, Focus & The Handsome Family 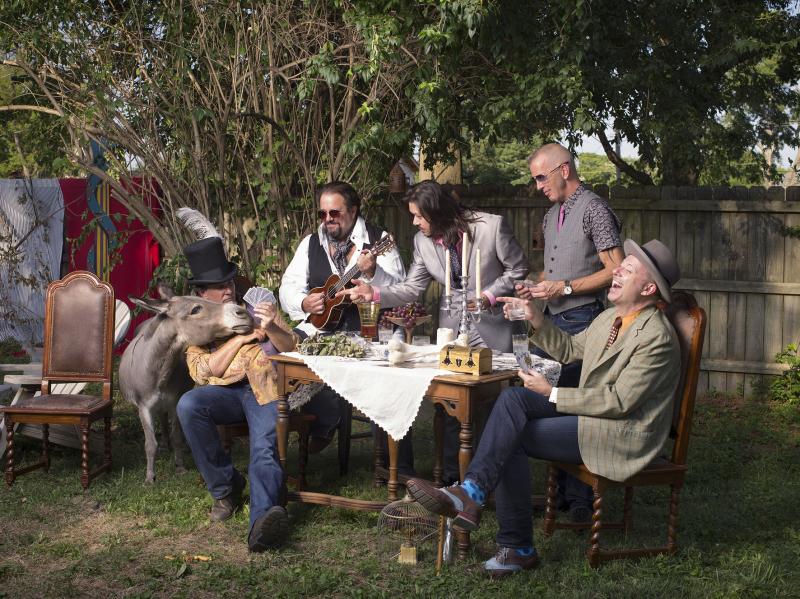 Perhaps The Mavericks should be worried about their audience demographic. At least when they're hitting Birmingham. It's unusual for most of a band's followers to be older than the players themselves, but this seemed to be the case at their almost-sold out Symphony Hall gig. It's a shame that Mavericks music doesn't pull in folks who are in their twenties, thirties, or even too many in their forties. The audience seemed to possess quite a limited clan-character, considering the broad swathes of the band's musical influences. Yes, some Mavericks songs inhabit an almost easy listening stratosphere, but there are just as many that rock out with duelling guitar serrations, heading closer towards the strewn wreckage-fields of Neil Young & Crazy Horse.

Difficult to categorise, Mavericks records mostly seem to reside in the country bins, which might account for the mellow, mainstream-ey emanations from the crowd. Miami is a strange breeding ground for this kind of outfit, so in actuality, the songs flit about madly, snatching licks and tics from rock'n'roll, blues, ska, Mexican, South American, reggae, rockabilly, surf, Cuban and lounge listening. Roy Orbison is always haunting Raul Malo's vocal delivery, soaring emotively, ringing with inner reverb. For around a decade, he's chosen a solo path, frequently with impressive results artistically, if not in terms of sales and profile, when compared to that of this original combo. Since 2012, the old Mavericks crew were called back together, and have already issued a pair of strong albums on the Big Machine label.

The Mavericks are at the peak of their powers, divergent leaves meshed into a magnificent, multi-hued popular music compendium. They exude the essence of optimistic entertainment, perfumed with a deep knowledge of American music genres, refried in the songwriting mind of Malo. They tread close to the line of kitsch, but bear bountiful baskets of emotional resonance. Harmony vocals from most of the band members heighten these vibrations. Co-founder and drummer Paul Deakin ceaselessly dominated from his riser, making his kit look tiny as he battered it in the name of propellant springiness. His energy didn't abate during the nearly two-and-a-half-hour set. Ninety minutes in, the band vacated the stage. This was either a toilet break, or the prelude to an almost hour-long encore. The majority of the numbers were upbeat rollers, torched harder and faster by the horn section twosome of trumpet and saxophone. The other augmentations of the core quartet were a bull fiddler and an accordionist who tripled on acoustic guitar and percussion. The hall's sonic spread was without fault: crisply loud, fully punching, with all subtleties sharply limned.

Malo occasionally chose acoustic guitar, but this didn't impede his momentum, used as it was for aggressive strumming. There was a surprising amount of soloing dialogue with supposed lead guitarist Eddie Perez, the pair of them vying for the most extreme razoring arpeggios, taking climaxes ever higher, towards trebly shimmering. Alternatively, Malo was fond of the deep-toned twang, on some of the ballads that provided brief calm amidst all the partying singalongs and quick-fluttering heartache tempi. "Pardon Me," from the new album was prime amongst these. Jerry Dale McFadden switched between piano and organ sounds, when he wasn't cavorting across the stage in the manner of Pee Wee Herman. During the course of this long set there were few dips and many exultant highs, not least some of the new songs, such as "All Night Long," or placed near set's end, "(Waiting For) The World To End," an example of their ska flirtation, words changed to 'waiting for the song to end,' then metamorphosing into 'waiting for the show to end,' throwing in yet another influence, this time a doggedly Steve Reichian repetition. Meanwhile, "Come Unto Me," from 2013's In Time album, is a monumental song, providing a level of intense climaxing only rarely attained onstage. An epic twanging shout of proud melancholia, with a Tex-Mex accordion and ear-splitting trumpet to boot!

A powerful double bill of alternative outfits that came to prominence in the early 1970s. Hawkwind were the official headliners, getting to play for over 90 minutes, but Focus still delivered around an hour's worth of prog virtuosity, with most of the audience already staunchly in place, arriving early for the prompt 7.30pm start. Whereas Hawkwind have evolved their sonic attack over the decades, albeit very gradually, Focus are dedicated to a close replication of their signature sound. The Dutch flautist and Hammond organist Thijs Van Leer has always been at the helm, but drummer Pierre Van Der Linden has been onboard virtually from the beginning, even though he was subsequently absent for a few decades. The younger members are now bassist Bobby Jacobs and guitarist Menno Gootjes, the latter confidently aping the skull-drilling complexity of Jan Akkerman's original parts.

Most folks will know, if anything, the epic multi-faceted "Sylvia" and "Hocus Pocus," with Leer's ascending yodels, plus abundant time-changes, guitar razoring aplenty, and numerous huffing build-ups. These tunes were negotiated with absolute precision, capturing the recorded evidence, but also loading up with a thrill of immediacy, as if the pieces had been penned only a few days earlier. There was still time to uncover less familiar numbers, stretching out more into organ groove, extended guitar frazzling and fluttering flute-work. Of particular note was "Eruption," an extended work from their second album. Leer might not appear very nimble nowadays, but his musical chops remain intact, when it comes to lips, fingers, breath and tonsils. Gootjes is clearly a student of this music, adding a punked-up energy to the guitar solos, edged with a smoking distortion, but still not too overloaded to obscure the dexterity of detailed phrasing. Van Der Linden manages to combine the power of a rock thunderer with the tonal variety of a jazz sticksman, so consequently his solos held an unpredictable depth, and a skin-tone suggestive of African drums.

The massive event-density of Focus made Hawkwind sound quite single-minded by comparison. Their sound mix didn't seem as balanced or projected either, although following the interval your scribe had relinquished his central position. After worming through the by-now close-ranked masses, and gradually settling into the vibrations, it became easier to appreciate the cosmic monotony. Such a phrase is intended as a compliment, as Hawkwind have perfected a rock version of minimalism, the interest being created by slowly-changing details. Bass riffs cycling around, filled with throbbing accents, synthesisers and theremin crafting swirls of sonic space-dust, mainman Dave Brock riffing perpetually. One of the electronicist pair, Dead Fred, sometimes switched to violin, taking on the old Simon House role, adding an unexpectedly aggressive texture to the already thickening black-hole-of-sound. Hawkwind's Quark, Strangeness And Charm (1977) is one of their classic albums, so "Damnation Alley" and "Spirit Of The Age" were unsurprisingly a pair of song highlights, the latter ending the encore in alternative anthem fashion. Oddly, there was no "Master Of The Universe," and even more unsettling was the absence of "Silver Machine," but this is a combo who can please the crowd without being conventionally crowd-pleasing.

Well, we enjoyed a post-1970s prog-jazz space-rock double bill, so now here's a pair of acts which can be deemed country-noir, found right at the top of the stairs at The Institute, in the building's smallest room, The Temple. Small it may be, but it just about contained a sizable crowd that seemed quite staggering in its numbers, bearing in mind that The Handsome Family drew only a mere smattering at their debut Birmingham gig, close to the turn of the last century. Perhaps the band themselves were surprised. It's often difficult to gauge the popularity of a cultish combo. This time, the audience were beaming lurve, hushed and attentive. Which is just as well, as a significant part of the entertainment lay in listening carefully to Rennie and Brett's bantering tales, interrupting each other like a good married couple, revealing dark domestic secrets of the Sparks household, and allowing no subject any immunity from satire's bite.

But first came a solo artist whose mood fell perfectly in line with that of his headline act. Daniel Knox was born in Chicago, and it sounded like this was his first visit to England, bewitched by the Birmingham shopping mall experience, making him feel so at home. It was more likely comparable with his childhood incubation in Springfield, Illinois. He's already up to his third album, exploring a songwriting loneliness that might spring from his somewhat estranged perspective, judging by some of the rhymes. Knox harbours a perverse misanthropy that is simultaneously insulting and amusing. He plays a keyboard that mostly emulates an empty-hotel sound, straight from The Shining, but also trimmed with pump organ wheezes, slow-ground swirls, and tones that bear the qualities of tape erosion as a pitch-shifting device. His vocal style is stentorian-sweet, enunciated in a formal 1920s mode, with sustained baritone drama and odd placements of phrase-emphasis. It's a darkly theatrical delivery of words that can be grandly conceptual, or perhaps starkly trivial. He should be applauded for his unrestrained individuality, and Knox certainly set the tone for the Handsomes, who are no strangers to gothic song.

Joined by their minimalist drummer, the Sparks twosome both sing, though Brett is the dominant vocaliser, with his rich evocation of the Johnny Cash resonance, underlined by his deeply twanging guitar parts. Rennie mostly plays a small acoustic bass guitar with a full sound, sometimes switching to eerie autoharp, which is akin to a zither with chord-buttons. The Sparks are lately dwelling in Albuquerque, New Mexico, home of Breaking Bad, but began their operation up in Chicago, back in 1993. This might be where Knox learnt his mixture of menacing and mirthful. It's not clear how much of the Family dialogue is repeated from an ongoing repertoire of anecdotes, but it certainly sounded spontaneous on the stage. Their songbook creates a very specific and special mood, musically traversing a homogeneous pathway, but lyrically transporting freely, alighting on a great variety of subjects, always spun out with a grim half-smile. This was the sort of show that would have been more suited to a seated bar or small theatre, but because the family find themselves trailing the rock circuit, we all had to stand stock-still for around 90 minutes. It's testament to their constantly magnetising qualities that this didn't seem like much of a trial.