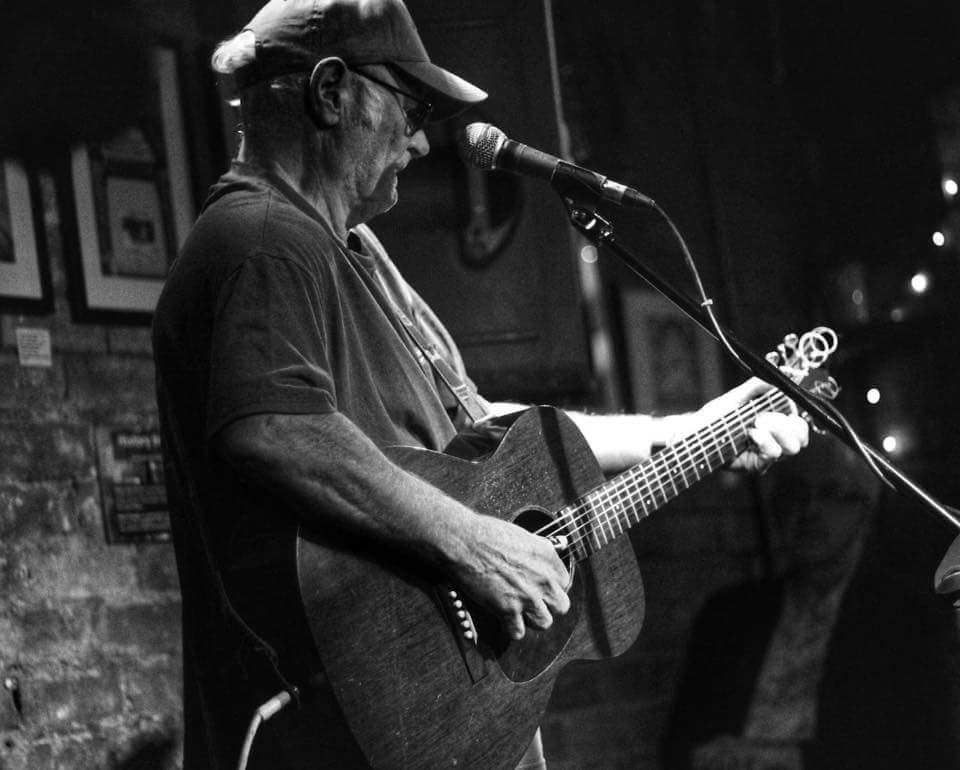 This intimate venue in the Kings Heath suburb of Birmingham was packed to capacity for an appearance by one of ye olde folk legends of England. Singer and guitarist Michael Chapman is now in his 76th year, originally sprouting in Leeds, and forging his reputation in the late 1960s. Chapman remains an enthusiastic touring artist, despite his deadpan humour being a backdrop to this ongoing scenario. His straight melodic construction on the acoustic guitar is decorated with filigree fingerings, transforming the backbone parts into elaborate constructions. Chapman's vocals are more down-to-earth, conversational in their make-up, emerging from a deeply gruff, yarn-spinning grumble.

He opens the first set with a scene-setting instrumental, before wading into his storytelling body of material, some originals, some old chestnuts. Chapman maintains a bassy low-string rhythm, whilst picking out quicksilver phrases on his higher strings. The microphone's got too much bass and reverb, given the natural depth of his gnarly voice, making it difficult to discern some of his verses. He wrote "It Ain't So" for Bert Jansch, but that other singer-guitarist didn't want it, Chapman chuckles. Lucinda Williams, another sharp-witted, raw-voiced troubadour, covered "That Time Of Night," a fairly simple, skimpy song, but here possessing a powerful mood. Chapman's crumbly old voice murmurs and mutters through his lines, but there's a firm foundation in the gentle sandpaper of his voice. Sometimes he even sounds a touch like J.J. Cale. The show ends up as a rolling and rambling odyssey, the closely gathered audience able to bask in Chapman's narrative glow, as he negotiates songs that are made up with parts of folk, blues, country and purely individualist singer-songwriter craft.

Two nights later, just across the street in this larger multi-room pub, another folk master came to town. The Edinburgh singer and multi-instrumentalist Mike Heron was a key founder member of The Incredible String Band, one of the most creative folk-bending crew in the entire globe. While Fairport Convention were rocking up the tradition, in 1966 and '67, the Incredibles were floating around the misty boles of twisted faerie-filled trees, looking Eastward, as well as inwards. For this show, Heron renewed an ongoing teaming (active during the last four years) with Trembling Bells, a younger folk-prog combo who also ferret around in free jazz and psychedelic realms. Opening the evening was veteran New York outsider-folk troubadour Ed Askew, who is also familiar with some of these other zones. Leafing through his notes, he played in an apologetically abstract fashion, but actually kept hold of a focused delivery, spreading a sense of an intimate living room performance around the venue, his voice gently floating, naturally relaxed.

The night's dynamic was quite odd, as the Bells next delivered an edited set, emphasising their most powerful songs, and therefore picking out the dramatic high points of their usually longer performance. Loaded with jagged theme- changes and duelling guitar freak-outs, they had to calm down later, when Heron joined them for a more mystically thoughtful, entrancing journey back to some of his classic late '60s and early '70s material. It wasn't the complete Bells, and the band was augmented by Heron's daughter Georgia Seddon on vocals, keyboard and tambourine, plus fiddler John 'Frog Pocket' Wilson.

Heron has the twinkling visage of a mischievous forest creature, his voice casually forming narrative threads, and lightly skipping through the songs. He emanates a magical charisma, coaxing out a completely different aspect of these now mostly acoustic Bells, not rocking, but rather joyously rambling, making up a folksier, more introverted procession. In the most positive sense, they help recreate the vibration of a hippy happening, of the most fey and fabled kind.

Back across the street again, a few days later, another solo singer/guitarist was telling tales, this time descended from a bluesy background. Matt Woosey is Cornish, but something of an itinerant touring artist, when he's not at home in Malvern. Woosey fills his set with amusing tales of his travels, possessing a fast line in self-deprecating humour, laced with absurdist observations. "Nowhere Is Home To Me" recollects a period in a van, with his wife and two pooches, steadily strummed into "Same Old Blues," a vigorous number that finds Woosey humming and soloing simultaneously. Notes are bent, quavering, vocals are hoarsely powered, the pauses between lines filled with micro-solo bursts. Another highlight is "When I Was A Cowboy," as sung by Leadbelly, but via Rory Gallagher's reading. Woosey's own "Black Smoke Rising" follows, with fully hollerin' vocal delivery, coming on like a composite blues song, with an alarming falsetto break-out and harshly sliding string action, adopting Son House moves, with a touch of lap-guitar skating.