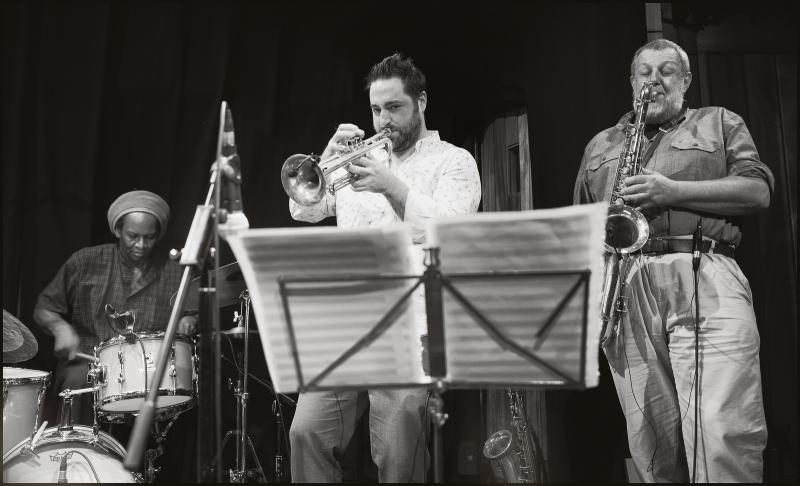 This gig was part of a very short three-date tour, assembled by Birmingham promoter Tony Dudley-Evans. Saxophonist Paul Dunmall's free jazz and improvising eminence has now cloaked the entire globe, so his regular Stateside tours have helped forge relationships with some of his finest American counterparts. The Chicagoan drummer Hamid Drake is one of these sonic allies, and a further collaboration between the pair is destined for natural success, both of them being powerful and thoughtful in equal proportions. Dunmall has penned an extended work for this gig in the intimate, and very nearly sold out Hexagon Theatre, The Dreamtime Suite retaining a free- form mien even though set within a pre-determined structure.

Besides special guest Drake, Dunmall had also co-opted a trio of younger players, two of whom are stalwarts on the Birmingham scene. Percy Pursglove (trumpet), Steve Tromans (electric piano) and Irishman Dave Kane (bass) all played a strong role in the communication of Dunmall's sonic conception. Drake dips into abstraction, when he's not discovering some fresh funk anti-rhythm to power a part of the music, before switching the beat into another type of beast, then slipping back towards the free-form skin-for-its-own-sake explorations. Pursglove acted in close harmony with Dunmall, until the themes broke off into soloing. There seemed to be more detailed instructions, when compared to many other Dunmall works, its movements carefully flowing and progressing. Pursglove and the leader came together again when they both hoisted their bagpipes to form a formidably bleating free jazz vanguard, upending the reality of the horn section with their wheezing skinfuls. Dunmall also tooted a brief solo on wooden flute/whistle, intensifying the improvising shepherd vibrations.

Tromans was extremely Miles-electric in his attack, joyfully mangled via his distorto pedal-settings, frequently impressing with the extremity and imagination of his soloing adventures. At one stage, Drake moved to a frontal chair, hoisting his large North African bendir, or frame drum, cutting back into a sparse, quietened sequence. Dunmall wasn't attaining his accustomed level of ripping expression, as this appeared to be a deliberately considered, and more texture-varied sequence of compositions. Consequently, there was a perpetually building sense of tension, dispersed via a series of folkloric investigations, which lowered volume levels, and opening up the pores to contemplation. The set has now been broadcast on BBC Radio 3's Jazz Now programme, and surely this was a fortuitous choice between the three prospective gigs, given the raised quality of this particular performance.

Singer Sheila Fawkes guests with the Phoenix gents, bringing an extroverted touch to an already chatty outfit. She delivers a couple of ditties midway through each set, then returns for the gig-climax. First, Fawkes tackles "Do You Know What It Means To Miss New Orleans?," which comes complete with a perky tenor saxophone solo from Mike Hayler. "Cakewalking Babies From Home" launches next, as a more unusual selection, delivered in romping fashion, then "Crazy Rhythm" follows, with trombonist Terry McGrath keeping it simple with a tin whistle, and then just with Pete Robinson's guitar accompaniment, for a spell. "Isle Of Capri" is in quartet form, led by clarinet, incarnated as a bouncy version, with a chordal bass solo. In the second set, Fawkes returns to sing "Nobody Knows You When You're Down And Out," her highlight moment of the gig. There's a calming "Creole Love Call," with clarinet and muted trumpet, a calling out for contemplation, continuing the well-paced variations of the show. McGrath sings "Home" (an old favourite of Henry Hall & His Gleneagles Hotel Band) in period style, followed by a breathy clarinet solo and a muted trombone quaver. The indoor New Orleans umbrellas came out on three or four occasions: always the barometer of a lively gig!