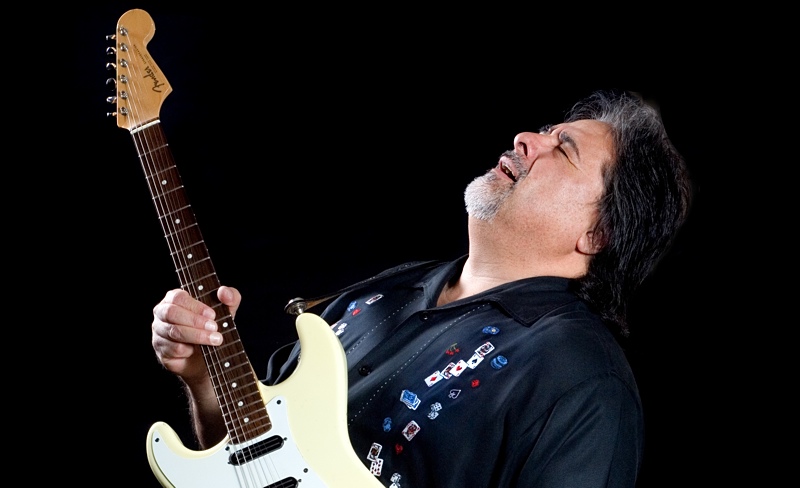 A touch of the sniffles didn't prevent California bluesman Coco Montoya from delivering a sterling set, easing out around 90 minutes of diversely faceted material. This southpaw singer-guitarist implied that most of his four-piece band had been slumping under the weight of a bad infection. Not so good for a touring situation, but we wouldn't have noticed if Montoya hadn't given us a health alert. He also expressed gratitude that he's still on the road and cookin' at the age of 62, flexing his hands as if his fingers were feeling the strain. Again, this could have been easily concealed by this modest troubadour.

Bilston lies deep in the heart of the Black Country, that spiritual home to Slade, Black Sabbath, and half of Led Zeppelin. The Robin R&B Club is steadfastly dedicated to all manner of rock and blues varieties, invariably included on all the appropriate guitar-totin' touring schedules. The energies of this set might have shifted in their nature throughout, but there was an ever-present aura of coiled power evident, even during the several ballad numbers that provided musical variety. One of Montoya's distinctive qualities is an ability to play with space in between the outbursts of articulately stinging solo expression. The repertoire traversed a broad range, with hints of Southern pop, salsa, soul and funk, usually underlined by chameleon keyboard settings, springing from piano to various organ sounds, Hammond to Farfisa.

Montoya was a member of John Mayall's posse during the 1980s, and this gig's encore was a Freddie King number, filtered through that old Bluesbreakers lens. He also featured a song that was penned for mentor Albert Collins (delivered in suitably howling fashion), then decelerated with some Smokey Robinson and included a strong showing of his own compositions. Since his solo career began around 20 years ago, Montoya has been signed to some of the globe's finest blues labels: Alligator, Blind Pig and Ruf.

He shouted out thanks to Laurence Jones, a rising star on the UK blues scene, who'd opened the evening with his three-piece band, which featured local bassist Roger Innes. Jones, from Stratford-upon-Avon, is also signed to Ruf. It would not be surprising if the pair started to guest on each other's sets once the tour progresses. Jones has more of a 1960s beat sound, mixing pop-rock with a heavier Hendrix element. "All Along The Watchtower" went down well, and Jones wished the ailing Walter Trout a steady recovery, playing the tune that featured both of them on the youngster's last album. Montoya too expressed hope for Trout's challenging recovery. Even though the crowd looked slightly lost in the Robin's ample space, they still compensated with extra-robust applause, sending Montoya home a happy man, even though the stage lights were blinding him to the empty expanse on the dancefloor..!

Terry Reid was invited to join the nascent Led Zeppelin, but US touring commitments prevented this happening. His recommended alternative was one Robert Plant, a Black Country boy who just happened to be in the audience for this gig, around 45 years down the line. Bilston is one of his old stomping grounds, and Plant is a genuine music acolyte who's regularly sighted on the scene here. Instead of playing with a full band, Reid decided to team up with pedal steel guitar specialist BJ Cole, a serial collaborator of note. They proceeded to journey through a substantial set that didn't seem overlong, despite its leisurely progress. Reid was very laid back, enjoying his selection of guitars from his Gibson endorsement arrangement. Perhaps he was a bit too excited, because the volume levels of his essentially rhythm-stoking parts were way too loud, frequently drowning out Cole's subtleties. This was missing the point entirely of having BJ along as a soloing colorist.

Reid's voice is still in good condition, even if it's edged with a throaty rasp. All the better to express his soulful, country-tinged blues. He actually delivered a Louvin Brothers song! In recent years, Reid has provoked differing opinions over certain performances, coming on like a variable Bob Dylan equivalent. On this night, he was in fine form. Ultimately, his main weakness is that the songs tended to amass a oneness of stylistic shape, over the duration, and with fewer anecdotes and observations between songs, the set sometimes took on a singular sound. All the more reason why it was crucial for Cole to be more dominant in the mix. Even so, the warm rapport between the twosome made for a continually engaging evening.