Live From Berlin: Kammerer OrKöster, A Night Of Turkish Free Improvisation & Objects To Be Destroyed 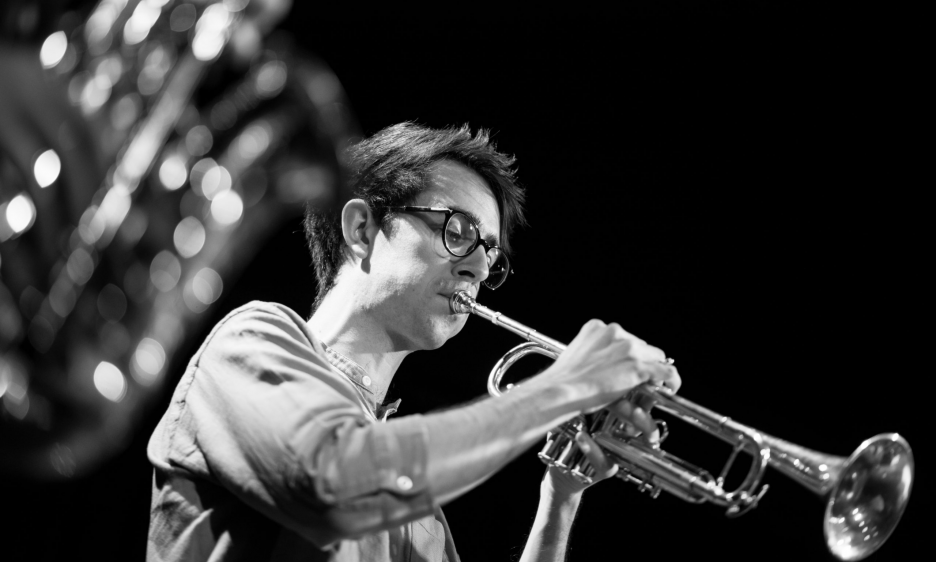 In the central Mitte area of Berlin lies b-flat, one of the city's chief jazz clubs, conveniently a basement den, although with more space than many such joints. Tables and side-seats are comfortably scattered without crowding-out, and the bar area is a separate space towards the rear. The stage is relatively low, welcoming the audience into the performance zone. Founded in 1995, b-flat now counts as a veteran Berlin jazz club, its acts seemingly not as famed as those who appear at A-Trane and Zig Zag, but still with a hardcore creative spread of bands.

On this pre-Jazzfest Berlin night, a mostly Austrian combo had made the journey, initially introducing their tunes in German, but soon curiously enquiring how many folks didn't quite grasp that tongue. Nearly everyone raised their mittens. This is the internationalist Berlin music scene! Kammerer OrKöster have their roots planted in the street perambulations of a New Orleans brass band, but their original repertoire uses that style as a stepping off point for explorations towards other genres, stitching, interleaving and hybridising art music with a celebratory racket, and even acknowledging that those two natures need not be in opposition.

The founding members were Jakob Kammerer (drums) and Richard Köster (trumpet/flugelhorn), but the line-up also includes a twin-trombone attacking front, along with alto saxophone and electric bass. One of the 'bones happens to be a bass-beast variant. A bouncy marching expansion settles itself restlessly on the basement stage, introducing reggae elements to the New Orleans terrain. Much of the work is scored, which takes care of the intricate manoeuvres, but the KO also includes boisterous improvisatory extensions. By their third number, even a disembodied abstraction was considered, with moderne horn-pricking. They scampered, then held, or paused, between parts of the funky fanfares of "The Little Luxury."

By the second set, it was clear that the KO enjoyed splicing together two or three 'movements' in a single piece, such as "What Is This Thing Called Alcohol?." Then, the bass 'bone forcefully led a humping Crescent City free-former, followed by a bass solo that would have sat well with Ornette Coleman's Prime Time band. They rounded out the evening, which started quiet, but grew its own enthusiastic crowd, with a wobblin' blancmange excursion down a funeral parade avenue, in a feast of gobblin' criss-crossin,' as the horns talked to each other with 'bone-homie. The slowie encore revolved around the Norwegian word for post bar-crawl kitchen scoffin,' involving tiredness but no immediate bedward trajectory. Is there an English word for such a state?

The b-flat is conveniently located around the corner from the magical Coop Anti-War café bar, an extremely unusual joint with a strong whiff of alternative existence in its bricolage-packed interior.

Arkaoda is a Turkish-run venue in the Neukölln zone, acting as a bar on street level, with an inner dj room, then some stairs leading down to its gig-basement. This is a perfect set-up. Once downstairs, a concentrating gathering of specialists were observing a foursome of free improvisers, with Turkish backgrounds: Şevket Akıncı (electric guitar), Merve Salgar (long-necked tanbur), Anıl Eraslan (cello) and Nihal Saruhanlı (drums/percussion). Akıncı sat cross-legged, surrounded by a carpet of effects pedals, intent on transmogri-frying his often extreme output. The opening stretch involved hardcore abstract improvisation, sensitised via micro-attention to tiny whispers, scuttles, scrabbles, ratchets and tensile digs. When Ornette Coleman's "Lonely Woman" swirled in, the quartet entered a melodic zone, as Eraslan briefly hinted at its theme in the beginning. This tune was much more conventionally arranged, although still remaining far-flung from its original source, illustrating the refined nature of the quartet's improvisatory techniques. Hearing free music with marked streaks of Turkish feeling created a very welcome freshness to the art of spontaneous music-making, utilising a palette rarely found in this format. Even so, Akıncı was certainly not averse to occasionally revealing his own psychedelic rock influences, as an additional tinting of the canvas.

Objects To Be Destroyed
Arkaoda
November 7, 2021

The advance description of Objects To Be Destroyed conjured a night of out-there, chaotic electronics free-forming from this collective grouping. The actual performance soon revealed itself as an extended marathon of pulsating groove repetition, closer to The Orb than to Supersilent. There were even a few outbreaks of gothic vocalising, and intoning doom-poetry. With the ensemble ranged in a row, tweaking their knobs, faders, and small keyboards, triggering a network of beats, it was an ear-trial to separate all of their contributing components, but the collective nature of this heads-down hypnosis session kind of made such an activity redundant. This was group rhythm therapy. It was particularly thrilling to catch this pair of diverse, divergent, but also aurally compatible gigs over the space of a few days at Arkaoda, your scribe's new fave Berlin basement.