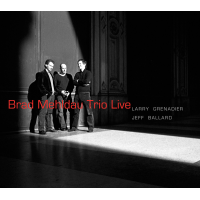 It's been three years since Jeff Ballard replaced original drummer Jorge Rossy in pianist Brad Mehldau's trio with bassist Larry Grenadier. While the trio has been busy on its own and with guitar icon Pat Metheny in support of Metheny Mehldau (Nonesuch, 2006) and Quartet (Nonesuch, 2007), it's also been three years since Day is Done (Nonesuch, 2005)— its only release to date. Rossy's departure left a significant gap to fill, but Ballard's greater energy and dynamism has ushered Mehldau's trio into its second decade with increased vigor and flexibility.

Recorded late in 2006 at New York's legendary Village Vanguard, palpable expansion of the inherent chemistry and immediacy of Day is Done can be heard on the double-disc Live. Mehldau's musical cosmopolitanism—adapting material from unexpected sources including Nick Drake and Radiohead alongside imaginatively reinvented standards and original compositions—is broadened even further. Twelve tracks range from a lithely energetic take on John Coltrane's "Countdown" that begins with a powerful stream-of-consciousness solo intro—demonstrating Mehldau's virtuosic and distinctively idiosyncratic approach to counterpoint—to the more contemporary groove of "Wonderwall," where extended, improvisation-rich vamps are broken up with pop group Oasis' slightly reharmonized but eminently singable chorus.

Mehldau's writing continues to blend tradition with modernity. "Ruby's Rub" swings hard, but alternates with stops and starts and shifting bar lines, making Grenadier and Ballard's seamless support all the more exceptional. Ballard's solo over a piano/bass ostinato extends beyond mere rhythmic pyrotechnics into a focused confluence of ideas that stands on its own as one of Live's high points. Grenadier rarely solos, but weaving astutely through Mehldau's oftentimes challenging rhythmic spontaneities and Ballard's responsive elasticity makes him more essential than ever.

From an outstanding two-and-a-half hours, two tracks indicate the trio's movement into new areas. The 23-minute "Black Hole Sun," from grunge/alternative metal group Soundgarden, proves that not only is good music where you find it, but that treatment needn't be definitive. Beginning as a surprisingly soft ballad, Grenadier delivers his only lengthy solo of the set, but it's when Mehldau takes over that the music enters territory freer than anything the trio has approached before. Its conversational aesthetic drives further shifts where delineated solos don't detract from the trio's undeniable democracy; rhythmic and harmonic migrations being so seamless as to feel preplanned when they are clearly spontaneous.

A fragile look at Ray Noble's classic "The Very Thought of You" demonstrates the trio's ability to let melody breathe, leading into Mehldau's lengthy, outward-reaching and stunningly beautiful a capella extro.

Ballard has lit an unmistakable fire under this group, but it's the trio's increasing open-mindedness that distinguishes Live from its previous live outings. Refined simplicity contrasts with sophisticated complexity while spare economy coexists alongside busier dynamics, making Live another exceptional milestone in a career defined by gradual but unrelenting growth and exploration.