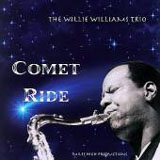 Saxophonist Willie Williams come charging out of the gate like Sonny Rollins' trio featuring bassist Wilbur Ware and drummer Elvin Jones on A Night at the Village Vanguard (Blue Note, 1957) The title track of Williams' Comet Ride is aptly named, with bassist Gary Wang and drummer Rudy Walker taking no prisoners alongside Williams' tenor, with lightning speed, dexterity and chops to spare. The liner notes reveal that the tune was named for the roller coaster ride in Hershey Park, Pennsylvania where a much younger Willie Williams experienced his first "Comet" ride.

It has been a long wait for Williams since his last effort, also a trio album Ww3 (Enja, 1993). Prior to that was a more mainstream effort with Spirit Willie (Enja, 1992). One misgiving about Comet Ride is that the format is much the same, with Williams penning eight of the ten tracks.

There are very few moments of relaxation on the album. "Tenor Ballet" is a short ballad, a duet featuring Wang's bowed bass in duet with Williams that offers more of an eerie feel than a lyrical one, while "I'm Misunderstood" slows things down to a mid-tempo blues.

Yes, there are plenty of variations on a theme, making "Three Generations" an exercise in free-bop and "Leprechaun's Dance" spotlighting Williams' soprano. Duke Ellington's classic "Caravan" closes the album, including the rarely heard vocal bridge and offering something that many of the others tracks lack—a strong melody line from which all the players sound better.