Maximize your visibility at All About Jazz by upgrading your musician page from standard to premium. With it, you'll receive All About Jazz home page exposure, a highly stylized / ad-free musician page with bonus features and benefits, an ad, plus you control where you sell your music and so much more.
Learn More
268 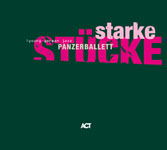 Those who bemoaned the breakup of the short-lived quintet version of mid-1990s group Lost Tribe which, along with saxophonist David Binney, bassist Fima Ephron and drummer Ben Perowsky, featured the twin guitar salvo of David Gilmore and Adam Rogers, will welcome the ACT debut of guitarist Jan Zeherfeld's Panzerballett. With a similar lineup, Panzerballett is as intrepid as Lost Tribe ever was in finding unexpected ways to bring together styles many would consider incompatible.

Unlike Lost Tribe, however, which devoted itself exclusively to original composition, Panzerballett's Starke Stücke is divided between largely Zehrfeld-penned tracks and covers of material ranging from AC/DC and Deep Purple to Henry Mancini and Joe Zawinul. And while Lost Tribe occasionally delved into metal-tinged aggression but also incorporated elements of hip hop, Panzerballett more exclusively emphasizes a hardcore aesthetic.

Both "M. w. M. i. O. f. R" and the lengthier "Friede, Freude, FuÃŸball" feature guest vocalist Andy Lind's near projectile-vomiting screams, but that needn't turn off those looking for clearer jazz emphasis. Both tracks are episodic—a defining characteristic of Zehrfeld's writing—and, while Panzerballett's relentless energy is in full force, so too is the hint of a lighter touch. Guest saxophonist Alexander von Hagke solos with abandon over a complex, M-Base-tinged rhythmic foundation from bassist Florian Schmidt and drummer Sebastian Lanser on "Friede," while a power chord-driven coda to the saxophonist's solo is followed by a subdued passage featuring Zehrfeld and Schmidt in an ethereal two-way before ultimately leading back to a more head-banging finish.

As intriguing as the Zehrfeld compositions are, with "Zickenterror" a fiery piece of avant-metal sporting an abstruse vocal exchange between Conny Kreitmeier and Zehrfeld, it's the cover material that reveals the most breadth. One might expect a group with this kind of heavy metal predilection to pull out all the stops for Black Sabbath's "Paranoid" but, instead, it's a gentle duet between Zehrfeld and Dombert that renders the song nearly unrecognizable. The markers of Deep Purple's "Smoke on the Water" are more readily apparent, although it's not guitar but saxophone that delivers the iconic opening riff. Again, the approach is more M-Base than metal, although the pounding guitars and staccato rhythms keep it well within Panzerballett's overall context.

The Scorpions' "Wind of Change" is reinvented as a soft ballad, with sophisticated reharmonization setting the stage for a dexterous solo by guest guitarist Ulf Wakenius that actually swings. Another ACT alum, guitarist Nguyên Lê, delivers a reckless solo filled with rapid legato runs and whammy bends on Joe Zawinul's "Birdland" where, for once, this over-covered Weather Report is turned into something truly new.

Despite its overall intensity and throbbing rock rhythms, Starke Stücke is an album that could only have been made by a group knowledgeable of the jazz tradition. While certainly not for the faint-at-heart, Jan Zehrfeld's Panzerballett is a group that, like Lost Tribe before it, brings new meaning to the term fusion.