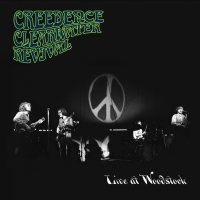 Creedence Clearwater Revival's appearance at the Woodstock Music and Arts Fair, shortly after midnight on August 16th 1969, wasn't so much a breakthrough as a consolidation of their burgeoning success to that point. The San Francisco Bay Area quartet had already released three albums, the most recent issued earlier that very month in the form of Green River (Fantasy, 1969). But they had also achieved the rare distinction of garnering hit singles in the rapidly-evolving era of FM radio wherein albums took precedence over individual songs like "Proud Mary" and the title track from aforementioned LP.

As a result, the audience that witnessed the approximately hour-long set in person at Bethel, New York, were no doubt as deeply impressed as those who will hear Live At Woodstock. The band's tightly-knit musicianship closely replicated the arrangements captured on their records to which just that natural modicum of spontaneity flavors cuts such as "Commotion." CCR's disciplined approach to writing, recording and performing distinguished them from their California counterparts of the era, most conspicuously, Grateful Dead and Jefferson Airplane, so that rather than totally digress from the outline of a song like like "Keep On Chooglin,'" for instance, Creedence preferred to create a groove, then dig into it increasingly deeply for the duration of the performance, here ten and a half minutes in length.

It's an approach in keeping with their roots in r&b/soul music, evidenced by their cover of Wilson Pickett's "Ninety-Nine and One-Half (Won't Do)" here, and like Dale Hawkins' "Suzy Q," from their eponymous debut album of the year prior. And then there's the inclusion of Ray Charles' "The Night Time Is The Right Time," a choice ever so appropriate given the group's set time around the witching hour, but more practically speaking, an emphatic signal the quartet was in the homestretch of their performance. The drive CCR instituted immediately upon beginning with "Born on the Bayou" prevails as shorter tracks like "Bad Moon Rising" proceed in quick succession.

Sans any but the most abbreviated introductions, the musicianship centered on the insistent rhythm guitar of lead vocalist/guitarist/chief songwriter John Fogerty's sibling Tom and the foursquare drumming of Doug Clifford. Sound producer Brian Kehew and mastering engineer Dave Schultz maintain the immediacy of the original recordings, so that these sparse instrumentals end up an enveloping listening, particularly on headphones. The stereo mix is both spacious and detailed even when the music isn't so spooky as this reading of Screamin' Jay Hawkins' " I Put a Spell On You:" Fogerty's guitar is even more caustic than his vocal caterwauling on tunes like "Bootleg," and both come through with the respective edge they possess, as do the few select but judiciously placed runs from bassist Stu Cook.

Over the years, there have been more than a few Creedence Clearwater Revival collections. But capturing the group as it does at the peak of its powers on a fairly broad cross-section of early material, Live At Woodstock may well stand as the most distinctive of those many anthologies (including previous concert releases). Its depiction of their music's virtues fifty years on sounds no more dated than the dramatic intonations of announcer Chip Monck, to loud crowd response, at the outset and close of the recording. And, as if such ratification were necessary, Henry Diltz' striking stage photo within the gate-fold of the CD digipak (or double vinyl LP package) reaffirms the vibrancy of CCR in action.