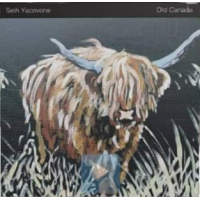 Anyone who's seen guitarist/composer Seth Yacovone perform his weekly solo acoustic gigs at the fabled Burlington venue Nectar's knows full well of his admiration of the work of Bob Dylan and Neil Young. And the most avid followers of his peripatetic activities have also most likely attended his regular tributes to the Canadian rock icon's work with Crazy Horse and/or his annual recognition of the Nobel Laureate's birthday.

The impulsive natures Yacovone, Dylan and Young share may be the overriding element in the music on Old Canada. An off-the-cuff air belies the five-year gestation period of these compositions, the recording of rhythm acoustic guitar and vocals for which the native Vermonter's well-honed instincts led led him to complete in a single initial session. A second studio foray in quick succession, allowed him to overdub those basic tracks with acoustic, electric, slide, baritone and bass guitar, as well as mandolin and some background vocals.

From the very start of the track from which this album draws its name, there's a sense of confident informality comparable to that which informed Life At Nectar's (Self Produced, 2017). In "The Road to Old Canada," Yacovone not only name-checks "the Great White North," but references its geographical corollary of Mexico. In doing so he evokes the influence Dylan, particularly as it relates to his work with the Band on The Basement Tapes (Columbia, 1975). Equally pertinent is the ache in his voice on "Since I'm Moving," where quick, bright guitar work reaffirms the vulnerable quality so reminiscent of Young in his earliest solo days. The burly Green Mountaineer also speaks straight from the heart on "Just Because," his open-heartedness calling to mind the former Buffalo Springfielder he so admires, but he betrays not a trace of any imitative approach in his delivery.

Aside from the somewhat muddled "Legal In New Zealand," which might better have been in the middle of these eleven tracks (or excised altogether), Seth Yacovone makes a giant leap in the sophistication in his writing here. Colorful characters abound on Old Canada and in songs such as "Holiday Again" and "God's Son's Ex-Wife," the author creates singular personages whose portraits he frames with finishing touches such as the electric guitar fills on the former cut. And, as arch (or even sarcastic) as the latter might sound on initial hearing, there's a touching echo of those heroes and villains we've all known in life at one time or another (and the often surreal likes of which have often populated Dylan's originals). Meanwhile, "There Is No One in Control" radiates paranoia through an ominous melody driven home with jagged guitar cutting through the rhythm, skewed staccato solos of which Crosby, Stills and Nash's one-time comrade would be proud.

Following so closely on the heels of the Seth Yacovone Band effort,Welcome (Self Produced, 2018), Oh Canada suggests its leader's hardy work ethic nurtures his prolific nature. His incessant schedule of activities is yet another aspect of his artistry he shares with his role models, but one into which he imbues his own inimitable personality (see those cover images front and back). Yet, in a little less than an hour on eleven tracks, the man often known as SethYac no more over-extends than he repeats himself, in so doing adding another unique entry into an ever-lengthening discography.

The Road to Old Canada; Since I'm Moving; Gran Paradiso; Holiday Again; There Is No One In Control; God's Son's Ex-Wife; We; Just Because; What I'm Feeling Is Only Love; Your Favorite Song I Ever Wrote; Legal In New Zealand.