Tim Buckley: Live At The Troubadour 1969 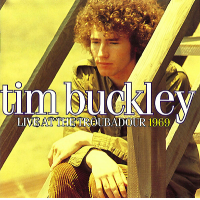 For an artist whose recording career spanned less than ten years, Tim Buckley seemed to get a lot done. From 1966's self titled debut, to Look At The Fool, his final album released in 1974, Buckley's oeuvre is as broad as it is varied. Ever the experimental troubadour, no other singer of the time was capable of absorbing such a diverse range of styles, whether that be folk, blues, jazz, rock, or classical, Tim was the ultimate when it came to freedom of expression.

Recorded on September 3 and 4 1969 at the Troubadour, Los Angeles, this posthumous live album is all the proof one will ever need of Buckley's extraordinary talent, a talent which for some inexplicable reason mainly went unrecognised. The material selected for this set ranges from his LPs Happy Sad, Blue Afternoon, and Lorca. Accompanying him was Lee Underwood (guitar, piano), John Balkin (bass), Carter Collins (congas), and Art Tripp (drums, marimbas), adding atmosphere and subtle texture behind Buckley's impassioned playing and singing.

Opening with the jazz-tinged "Strange Feelin,'" Buckley imbues the tune with a certain majesty, giving it an almost fairy tale, dream-like quality. The term folk-jazz is often applied to Buckley's earlier work, and here the singer's vocal confidence is on full display, yet so much of it is transient, as it is on the wistful "Venice Mating Call," on which Buckley turns his voice into some otherworldly instrument, as he also does on the intense "Gypsy Woman," a song that would soon find a home on Starsailor.

There are moments where Buckley seems lost in his expression, especially on "I Had A Talk With My Woman," where Tim's soft autumnal croon drifts like a mild ocean breeze around the listener's ears, while the previously unreleased song "I Don't Need It To Rain" is like medicine to the soul. "Blue Melody" and "Chase The Blues Away" are both exquisite reminders of Buckley's unique gift as a vocalist, not to mention mystic story teller.

One wonders what the audience must have thought of "Nobody's Walkin,'" where for over 16 minutes Buckley yelps and soars his way into free-form nirvana, something akin to a human saxophone, as the band mesh behind him, forming an almost intangible web of keyboard and congas.

It is remarkable to think that Tim Buckley was only 22 when this recording was made, evidence of his incredible faculty and creative ambition. As a folk singer, Buckley had enjoyed a reasonable amount of success, however by the late 1960's, his penchant for experimentation began to frazzle many of his fans, who began to fall by the wayside once he went off into uncharted waters. Disillusioned and financially frustrated, by the early '70s he would go on to reinvent himself as some sort of sex-funk crooner, as heard on Greetings From LA and Look At The Fool, yet such seemingly commercial ventures weren't enough to bring him the acclaim he deserved and so desired.

Were he around today, Buckley would have no doubt revelled in the fact that his music is still enjoyed and celebrated. Live At The Troubadour sounds as fresh now as it must have then to those lucky enough to have been in attendance. Fortunately for us, this document has survived and is a lasting reminder of Buckley's incomparable talents.

Strange Feelin'; Venice Mating Call; I Don't Need It to Rain; I Had a Talk With My Woman; Gypsy Woman; Blue Melody; Chase the Blues Away; Driftin'; Nobody Walkin'