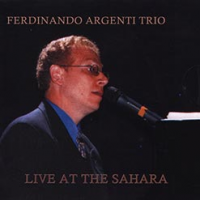 Italian born but now Massachusetts-based resident Argenti is a pianist with multifarious talents which are abundantly showcased in this live trio session recorded in 2013. The opener, "Bloomdido," immediately signals that this band is on fiery form, doing superb justice to Charlie Parker's famous standard. The mood quietens somewhat for the mid-paced "Poinciana" but not without Argenti displaying some ornate, articulate playing. "I'm Old Fashioned" sees Argenti on vocals and piano smoothly interpreting this old Jerome Kern number with some very neat scat improvisation in unison with the piano followed by solos from Marshall Wood and Marcello Pellitteri.

Argenti's vocals on "Spring Is Here" distinctly channel Ol' Blue Eyes himself, such is the level of emotion packed into his voice and this is certainly endorsed by the ecstatic reaction of the audience. By contrast his interpretation of Antonio Carlos Jobim's "O Grande Amor" softly sung in Portuguese is another example of his vocal versatility. "Blues In The Midst Of A Crowd" performed at an allegro tempo, is an Argenti-penned instrumental, affording the pianist an opportunity to display his chops, with Pellitteri additionallyoffering a finely honed drum solo. Returning to vocal duties, Argenti delivers the ballad "Historia De Un Amor" in Spanish as mellifluously as if it were his mother tongue.

Chick Corea's "Got A Match" quickens the pace once more and gives Argenti some further room for a bravura piano display. "Mi Sono Innamorato Di Te" has Argenti singing his fourth language of the evening, this time in his native Italian, and is embellished, incredibly, by him executing a short melodica solo whilst simultaneously laying down some comping piano. The final number "It's You Or No One" is a breezy instrumental featuring a dexterous pizzicato bass solo from Marshall Wood. This set, recorded in a jazz club north of Boston, benefits from excellent sound quality and superb musicianship and deftly combines both virtuosity and soul.

Bloomdido; Poinciana; I'm Old Fashioned; Spring Is Here; O Grande Amor; Blues In The Midst Of A Crowd; Historia De Un Amor; Got A Match?; Mi Sono Innamorato Di Te; It's You Or No One