By DAN MCCLENAGHAN
October 14, 2010
Sign in to view read count 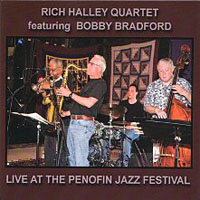 Like the very best of them, every time Rich Halley puts his horn in his mouth it's a celebration of the sound of the saxophone. His powerhouse blowing capacity and testosterone-soaked sound hearken to the great Sonny Rollins and the late Dewey Redman. His ensemble approach featuring two horns—cornet and saxophone, supported by bass and drums —comes from the classic Ornette Coleman period. But the music's personality is pure Rich Halley.

Speaking of Coleman, there's a small degree of separation on Live at the Penofin Jazz Festival, with Halley's tenor saxophone lines intertwined with the cornet artistry of Bobby Bradford, who played with Coleman on and off in the fifties, sixties and seventies, and can be heard on the free jazz legend's The Complete Science Fiction Sessions (Columbia Records, 2000), recorded in 1971.

On Live at the Penofin Jazz Festival, a set of all Halley originals, the saxophonist and his quartet open with the title tune from Halley's The Blue Rim (Louie Records, 2003). The music begins with a warped two horn fanfare that rolls into a bop beat on Clyde Reed's walking bass and drummer Carson Halley's initial march beat, then goes wild, leading into Bradford's wandering solo. Rich Halley blows in with a torrid tone, and there you have it: a Rich Halley recording changes from second to second, traveling to unexpected places with sounds that are sometimes sedate, and sometimes wild and wailing. Sounds that seem to make complete structural sense then break apart in the direction of chaos.

"The Street Below" opens on Carson Halley's rumbling rock beat. It almost sounds influenced by hip -hop through Bradford's then Rich Halley's initial soloing. When the saxophonist pushes things in a freer, screaming direction, Reed and Halley keep the rhythm on a straight track, leading into a two horn conversation, polite but intricate, then leading back into the theme.

"Grey Stones/Shards of Sky" is, at fifteen minutes, the longest offering of the set, a tune that shifts from searing saxophone to tight cornet blowing in front of crisp and precise military march rhythms—a searing quarter hour of free jazz.

"The River's Edge is Ice" is more of the same: shifts and turns, a bunch of free blowing, lots of energy and lots of off-kilter tangents. A fitting close to a stimulating set of sounds.

The Blue Rims; Street Below; Grey Stones/Shards of Sky; The River's Edge is Ice