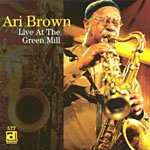 No need to command Ari Brown to make a joyful sound, he gladly obliges on this live date at the Green Mill in Chicago. The sixty-something saxophonist draws on the Chicago tenor tradition, along with spices from the 1960s sound of John Coltrane, Joe Henderson, and Eric Dolphy.

Starting out on the windy south side, Brown played with soul and R&B bands. It wasn't until he was a mature player that he focused mainly on jazz. For this reason, maybe his playing was hardwired for entertainment. Certainly the crowds at these two nights in the summer of 2007 gladly accepted the message. Brown joined the AACM and played with Elvin Jones, Roscoe Mitchell, and Anthony Braxton. Perhaps Brown's best recorded work has been with percussionist Kahil El'Zabar on such Delmark recordings as Big Cliff (1995), Live At The River East Art Center (2005), and Big M: A tribute To Malachi Favors (2006).

Live At The Green Mill focuses on original compositions, from Brown's 1950s "Richard's Tune, a bebop taste of comfort food, to the Rahsaan Roland Kirk tribute "Two Gun V, he distinguishes himself as both a player and writer.

His playing is soulful and immense. He can fill the room with a blanket of sound, as he does on the opener, "Richard's Tune." His band is anchored around the presence of bassist Yosef Ben Israel and the Elvin-like drumming of Avreeayl Ra. Pianist and brother to Ari, Kirk Brown is a perfect foil and partner in rhythm for this music.

The infectious "Evod is an attacking funky anthem. When Ari takes up the soprano on "Shorter's Vibes brother Kirk keeps the intensity flowing. Brown's soprano sounds more Trane than Wayne here, and Kirk is more McCoy than Herbie, but who's complaining?

"Two Gun V, with its introduction of electric piano and the two-horn-touch, ups the energy even higher. But it is the softer tracks that have the staying power. "Kylie's Lullaby unfurls with Pharez Whitted's muted trumpet of and Brown's flute, and the balladic "One For Skip is a brawny man's tender expression of love.

Live at the Green Mill comes as a CD or a DVD, with one bonus track and an available audio commentary by Brown.