I got in with some younger guys who were listening to Charlie Parker. And I thought what the hell is that?

Pianist John Bunch has a lot of fantastic memories playing with such jazz luminaries as Benny Goodman, Woody Herman, Eddie Condon, Maynard Ferguson, Buddy Rich, Gene Krupa and as accompanist, musical director and conductor of major orchestras for Tony Bennett, but he recalls another "unforgettable" moment that wasn't so great.

Even at 86 and still a working musician, that recollection smarts. The image that sticks in his mind, when he thinks about it, is the face of the rather well-known conductor of the Indiana University Orchestra peering through the little glass window of a practice room at the school where he and buddy trumpeter Lee Katzman were jamming. To make sure his dislike for jazz was clearly telegraphed to these dedicated youngsters this "gentleman" made sure they could see he was holding his nose! "And that gives you the attitude towards jazz in 1949 or whenever that was and yet at that same school now you can get a degree in jazz," he says.

So sometimes if you stick around long enough, things can change and for the better. Bunch, who seems the nicest man in conversation, and whose piano playing is extremely amiable also, has reason to be sensitive on the subject of jazz education and impressed by the change. After getting shot down during a bombing mission with his ten-man crew in World War II, he was put in a German prison camp. "I didn't get to play much in those three years," he says in his understated way. "I survived that awful thing of being shot down, somehow by a miracle." But with the war over and with him eager to resume his jazz life, it seemed that things should go smoother.

They didn't. Despite the GI bill, he was rejected from all the music schools he wanted to attend (Yale, Juilliard, University of Michigan) "because I couldn't read music." That's how he got to Indiana University, where he majored in speech thinking he'd be a radio announcer, as his mother wanted him to get that college education. And then, the "luck" as he so modestly puts it, chimed in. Not taking the advice of people trying to steer him in the wrong direction, Bunch got to show off that beautiful, lyrical bebop-inflected playing style in evidence on many recordings since, including some excellent contemporary ones from the Arbors and Chiaroscuro labels. After toiling in factories and other day jobs he moved to Los Angeles in the mid '50s. There he hooked up paying gigs with saxophonist George Auld and pianist Jimmy Rowles, who later recommended him to Woody Herman. Miles Davis used to play across the street at Jazz City, so lots of musicians dropped in to join them. "Buddy Rich and Maynard Ferguson sat in with us several times. They were freelancing like us."

The gig in Herman's big band landed him many one-nighters and would lead eventually to Eddie Condon and his calling New York home. "The bands like that just played one night and then 200 miles later somewhere else and on and on, seven days a week, traveling every day, year in and year out." he recalls. "Now and then you got a week in Chicago or a week in New York. And that was it."

But of course he wasn't complaining. It was the big time—and far away from that jazz-hating guy with the unpleasant nose at Indiana University. "I was a young man, I loved it. To get a job like that in those days was really nice, first-class. I used to go hear Woody Herman as a customer when I lived in Indiana and to hear that music was great, always the best. So it was a thrill to play in his band and he was a wonderful guy too, a real gentleman."

Later, he jumped to Benny Goodman's big band, a move he had fantasized about as a child listening to radio in Tipton, Indiana, where he was born and raised. One good thing about Tipton was his parents got him piano lessons with well-known Hoosier jazz pianist George Johnson "who played in the Fats Waller style." And there was a Cy Walter-led popular music program on the radio that featured folks like Teddy Wilson and Art Tatum. "Just to be around that music was fantastic as I grew up listening to that. I used to try to imitate his [Goodman's] pianist as kid." That pianist happened to be the legendary Wilson. So to get to New York and play with Goodman "was a real privilege, inspiring." 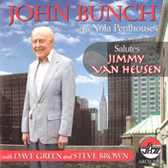 He loved Waller, then Wilson. And then "...I couldn't believe what I was hearing after the war. The war was more than a war. It changed many things and music was one of them. I got in with some younger guys who were listening to Charlie Parker. And I thought what the hell is that? That was so far-out. But they kept making me listen, playing the records all the time. And at first I didn't know if I wanted to play that way. But boy it didn't take long. I went crazy over bebop... So I ended up sort of trying to play that way. I liked Bud Powell, number one. And then of course Hank Jones, who is still living and a friend of mine. I loved his playing and still do... and I loved Wynton Kelly. So if I'm influenced it would be from that end of the spectrum."

Music might even have helped him get through life, too, in the best way. Luckily he didn't pay attention to those people who tried to discourage him. Speaking of one of those, he phoned later to say he had gotten that jazz-hating man's name—from Katzman himself, who also lives in town. It's Ernst Hoffmann.

Judging from the wonderful sound Bunch has on all those CDs and that Katzman went on to big band glory as a distinguished trumpeter, Mr. Hoffmann should have kept his nose to himself.