Live At The Green Mill 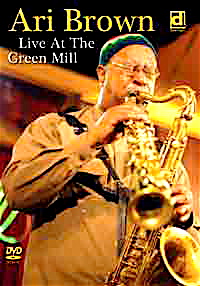 Ari Brown has deep-running roots and, though in the past he's been associated with the likes of Lester Bowie, the music on this DVD is more straight ahead than his association with Bowie and the AACM might imply. His band has all the hallmarks of a working unit, and Delmark's usual careful attention to both the sound and the visuals lends to the overall package the air of authenticity we've come to expect from the label's faithful documentation of the eternally vibrant, seemingly ever-changing Chicago music scene.

Brown's never overpowering but always heartfelt musical sincerity is apparent from the start on "Richard's Tune," on which it's possible to trace his lineage back through the likes of Gene Ammons. His playing is graced also with unmistakable economy: not a note is wasted in a tenor sax solo that also hints at a largely overlooked player like Harold Ashby, particularly in the grain of the tone, albeit in a harmonically more advanced setting.

He's no negligible composer either, as he demonstrates on the all-original program. "One For Skip," a ballad that sounds like it ought to be a jazz standard, is imbued by the saxophonist and pianist Kirk Brown with a rare reflective stillness. Here again the manner of Delmark's presentation comes into its own, achieving a balance between the aural and the visual that enhances both media while remaining faithful to the live context; gimmicks are never welcome when they're superfluous to the musical requirements, a practice that has become modus operandi for this label.

"Shorter's Vibes" might be something of a misnomer as there's a whole lot of Coltrane in Brown's soprano sax playing, but the divided focus leads to an engaging performance. The piece is arguably the high point of the set, the band gelling and virtually raising the roof.

The standard practice of featuring a commentary track amongst the special features on this DVD puts Brown into a musical-social context through his own words. A combination of thoughts concerning his band members and reminiscences about his own musical directions enable Brown to make a case for the music while placing it firmly within the tradition of the AACM and Chicago creative music. The feature also raises the project to the level of a documentary of social history, making the viewer wish more DVD producers would use the format in a similarly productive way.