By GREG CAMPHIRE
October 5, 2007
Sign in to view read count 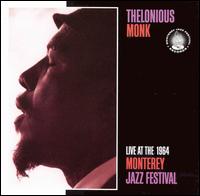 As part of the series of recordings launching the Monterey Jazz Festival's new record label, this previously unreleased 1964 set by Thelonious Monk offers a glimpse of the maestro with an augmented version of his working quartet of the time, during which the pianist was finally receiving much-deserved mainstream attention from the public. Monk can be heard clearly enjoying his time in the spotlight after more than two decades of perfecting his singular approach; he plays some of his better-known tunes in a relaxed manner and gives his sidemen ample space to stretch out before an appreciative audience.

Most of the six tracks on Live at the 1964 Monterey Jazz Festival approach or eclipse the ten-minute mark, allowing plenty of solo opportunities for the quartet as well as the added MJF Workshop horns, who are led by multi-reedist and west coast legend Buddy Collette and appear on two of the album's tracks: "Think of One and the often-played staple "Straight, No Chaser.

Considering the possibilities of having five additional horns delving deeply into Monk's dense harmonic frameworks, it's slightly disappointing to hear the only-average results. While the extra brass does add some heft to the melody statements, their casual background punctuations otherwise come off as cursory sketches rather than fully integrated arrangements. Perhaps the collaboration was rushed, but it's only a minor complaint. Special mention goes to trumpeters Bobby Bryant and Melvin Moore, who both rise to the challenge with hot, energetic solos full of daring verve and showmanship.

Elsewhere, right-hand man Charlie Rouse expounds upon Monk's themes masterfully, as the tenor saxophonist is captured here at about the halfway point in his 10-year tenure with the composer. His bright lines become intricately threaded within the architecture of the compositions, even when Monk's accompaniment develops into sparse, haiku-like commentary, or when the pianist lays out entirely.

Indeed, these moments when Monk is absent behind any given soloist are fascinating; presumably the pianist is getting up and doing his patented dance around the bandstand, indulging in the funky freedom his music embodies while the band splits into a horn/bass/drums trio anchored by an effervescent Ben Riley and solid subbing bassist Steve Swallow. The non-chordal lineups reflect the similar experiments of Monk disciples Sonny Rollins and John Coltrane with that particular format, allowing for further extrapolations of a song's finer points while unencumbered by any specific harmonic weight that the pianist might suggest.

At this point in his career, Monk received some complaints from die-hard fans that found his appealingly unorthodox approach somewhat tempered by age; that he had settled a bit too comfortably into his own repertoire. While the familiar set list and lengthy sidemen solos of Live at the 1964 Monterey Jazz Festival may reflect some of these observations, one listen to the album's fierce rendition of "Evidence reveals that Monk and his band are at the height of their creative powers. The quartet tears it up throughout the frenetic, tightly-wound changes, encapsulating a perfect description of Monk's music: distinctively angular, sharp-witted and, most of all, swingin'.